For some strange reason I wish I could just sit and talk with female family members that came well before me.  I guess it's a touch of nostalgia or plain wishful thinking.

What would they have thought about my writing career? Would they have enjoyed reading what I write? I have a sneaking suspicion they would. They had the Brontes and Jane Austen of course, but not the plethora of faith-based novels we have today. Maybe they'd be shocked at the way we portray our feisty heroines...no, on second thoughts, I reckon they'd be thrilled. Yes, come to think of  it, some of the family tales told and retold down the years involved some exciting (for those times) scrapes and adventures. None of these girls seemed to be "under the thumb" of their lord and masters. Or were they simply not admitting it?

> To look at  my great great grandmother you would say she appears to be a disapproving type, but surely her expression is only because the photographer
was fiddling with his apparatus and her corset was killing her. However, my
darling tells me I can look at him like that at times when I am merely thinking of some plot twist and that takes concentration! I would hope she'd enjoy reading my stories. 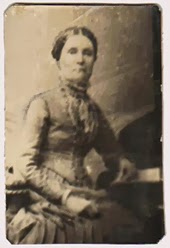 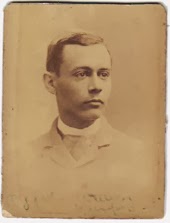 My sweet faced great grandfather left his beloved wife to go to Heaven. She was desolate And maybe, according to my mother, that's why she became rather pessimistic. She began every sentence with "The worst of it is," before she ever got to the best of it. I suppose there is some merit in looking at the downside of something before committing oneself. No, I don't think she would have liked my heroines who tend to be optimistic even when one thing after another goes awry. Great grandma turned out to be a very practical no nonsense type of lady. And no wonder when she had three lovely young girls to take care of. Her dreams had to be tucked away while she looked after her daughters' future. A hurdle many young widows had to face in those days. 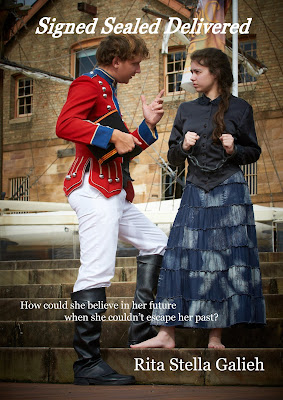 My feisty heroine, Megan Trevallyn, gets a lot more than she bargained for when she meets Captain
Charles Cantrell. This included two little surprises
with the outcome of being transported as a felon to a far flung colonial penal settlement of New South Wales - a world away from all she has known and
loved.

The question for her to face is, will this be a land of
perdition ... or promise?

Although fiction, in my research I discovered this scenario was all too common in our early history. Yes, we had many convicts who had committed awful crimes, but there were always those who had arrived on our shores innocent of the crimes for which they were penalized.

While capturing this story I asked myself whether I could have survived such an ordeal and I knew deep down I couldn't have without the Lord.

I am so pleased my historical romance with elements of intrigue is now online at Amazon Kindle at a reasonable $3.99.