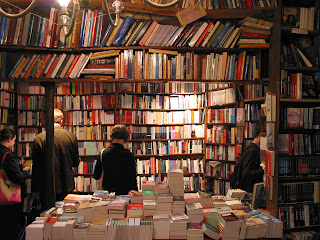 It's surprising what we sometimes discover. I read in a short article that when Harper Lee was about halfway through working on "To Kill a Mockingbird", she had a bad day and flung the manuscript out of the window into a pile of snow. If her agent hadn't convinced her to fish it out and dry it off, the world might have missed out on what is regarded as one of the world's finest novels, a social commentary and coming of age novel rolled up in one.

I was also amused to read that J.R.R. Tolkien always thought his "Lord of the Rings" manuscript needed just a bit more work. He always procrastinated handing it to his publisher because he was trying to fix it up somehow, but there was always some other glaring fault visible. Eventually his family suspected that it would never be done to his satisfaction. They stole the manuscript from his drawer one day and sneaked it to the publisher themselves. He was surprised to receive the call telling him, "This is fantastic!" It seems he never quite forgave his family, shaking his head and telling them, "I hadn't quite finished."

True stories such as these tell me a few things. The first is that when we are working on our books, we authors may reach a stage at which accurate, unbiased judgment is impossible. Sadly, it's the same in every aspect of life we work hard on. The housewife who slogs along, cleaning and nurturing all day might have long spells of missing how wonderful her family and lifestyle really are. With writing, although we are often loners and consider our work a solitary occupation, we do well to have a few straight-thinking allies to support us. Who knows, they may be required to save the day. Lee's agent and Tolkien's family were unsung heroes who actually played huge roles in the history of twentieth century literature.

Secondly, I started thinking about the sad waste of brilliant stories we'll never even know about. The two examples up above were saved to see the light of day, but the world must be filled with manuscripts representing hours of work which will never make their way out of dusty drawers, not to mention the ones which were probably attacked with blazing matches. It's easy to shrug about this, as we'll always be ignorant, but we'll never know how bereft the world may be, for missing some of this fantastic material. I'm sure there must be millions of pages.

So let's be encouraged to keep doing what we do for as long as enthusiasm burns in our hearts. As authors, even when our books deeply touch the hearts of just a few people, it's well worth working on them. As friends, we may be called on to help our fellow authors return to their work, because we can see the value in it, while they are blinded with discouragement and fatigue for a short time. Finally, let's always be on the lookout for gems from the past which may be resurrected to see another day. In this electronic age, I love to see old, formerly beloved titles from decades ago renewed as eBooks. With these, we are sometimes told something like, "A team of volunteers got it ready for kindle." Although they are also unsung heroes and rarely named, what a wonderful work to be part of.

Paula Vince lives in South Australia with her family. She is a homeschooling mother and award winning author of contemporary inspirational fiction, which is mostly set around her own beautiful Adelaide Hills, with its four distinct seasons. She believes that nothing has more power and potential for good in the world than a well-written and powerfully told story.

These thoughts were bought to you by Paula Vince at 06:57