The Plan, The Thing and The Other Things

I like a plan that comes together, don’t you? We all have them. Nicely thought out, supported by research, relevant consultation and wise advice, organised and actioned consecutively in a timely manner, success celebrated with circumspect consideration for all the answered prayers, amazing people that came alongside to help, all those wonderful coincidences whereby everything fell into place in the nick of time, followed by moments of thankfulness and modest recognition for your own personal diligence in achieving such a positive outcome. Does that describe your usual experience?  Yes? No? Sometimes? 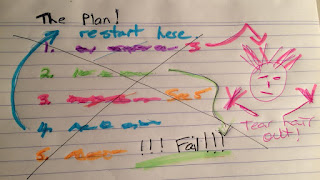 If you answered ‘Yes’, please, oh please, tell me do, how do you do it? I am keen to know because, after a year (at the least) of having one plan after another hijacked by circumstances beyond my control, I think I have lost that plot! Unexpected obstacles thwarted my every move; nothing happened ‘in a timely manner’, wise advice eluded me when I needed it most, my prayers appeared to ricochet. I thank God I was able to enjoy some precious moments with some amazing people in Katoomba and Sydney during the 2016 Omega Writers Conference. Without them, I’d be a mouldering heap of blithering self-pity right now (as opposed to the tongue-in-cheek purveyor of philosophical rhetoric on how life really works that I’m trying to pull off here).

I have felt like the protagonist in an experimental first draft; the arc of my character development pushed to and fro by an unruly pendulum. Who on earth is writing me into such a frustrating story? I mean, just because a good writer drives their precious, bookish creations to the brink of insanity if not destruction so that truth will be revealed and meaning or purpose discovered, it doesn’t mean … It doesn’t mean … Oh. Yeah. It does. I get it. Now.

I get it because I know the Author:

‘Your eyes saw my unformed body. All the days ordained for me were written in your book before one of them came to be.’ Psalm 139:16 (NIV)

I get it because I know He knows the plot:

‘“For I know the plans I have for you," declares the LORD, "plans to prosper you and not to harm you, plans to give you hope and a future.’ Jeremiah 29:11 (NIV)

I get it because I know He has a purpose:

‘And we know that in all things God works for the good of those who love him, who have been called according to his purpose.’ Romans 8:28 (NIV)

‘He has given us new birth into a living hope through the resurrection of Jesus Christ from the dead, and into an inheritance that can never perish, spoil or fade … you believe in him and are filled with an inexpressible and glorious joy, for you are receiving the end result of your faith, the salvation of your souls.’ 1 Peter 1:3-4, 8-9 (NIV)

Are you frustrated by a similar period of thwarted plans and a confusing life script? I encourage you to hang in there (that’s what I’m trying to do) and trust that God has both the process and the outcome covered. After all, given the longevity and ongoing sales record of His written word, He is clearly an excellent author with a proven track record.

So here’s the thing: Although my plans may go awry, my life still has purpose and meaning because God created me with His purpose in mind.

Here’s another thing: Discovering His purpose, then walking in it, is proving to be a very grand adventure, with high stakes and unexpected twists and turns, but it promises an awesome outcome. Bring it on!

And here's another thing: I’d like to share a concept I learned while attending a recent Queensland Writers Centre Express Year of the Novel Course led by Veny Armanno. I found the concept useful for analysing plot and simplifying or distilling a story into a synopsis. The theory, posited by Tony Earley, says stories need two pieces: The Thing and The Other Thing. 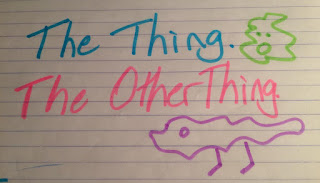 As I understand it, ‘The Thing’ is your story’s central idea or premise which, on its own, may be interesting or relatively mundane, even familiar. For example: Girl meets boy and falls for him.

‘The Other Thing’ is the approach, the twist, the extraordinary thing that gives your story zing, and takes it to another level. For example: The boy is a righteous alien from Krypton and way too busy saving the world from evil to court a brash, female journalist who is forever getting into trouble, but court her, he does. (Yeah, I'm a fan of Superman. And feel free to jump in on the allegory.)

Not wishing to trample any copyright toes, I tried (unsuccessfully) to find a link to the originator, Tony Earley. What I found instead was a post by Sharon Pelletier of Dystel, Goderich & Bourret LLC. Sharon explains Earley’s premise in words more-or-less identical to those in the course notes I received. So I’ve included her link here for anyone who would like to read more about ‘The Thing and The Other Thing’.

Have any interesting things (or 'Other Things') rocked your world recently?

Mazzy Adams is an Australian wife, mother, grandmother, creative and academic writing tutor and published author with a passion for words, pictures and the positive potential in people.
Website: www.mazzyadams.com

Email ThisBlogThis!Share to TwitterShare to FacebookShare to Pinterest
Labels: distilling for synopsis, plans gone awry, plot twists, The Plan, The Thing and The Other Thing