I am still learning

I read recently that the little sentence ‘I am still learning’ (‘ancora imparo’ in Latin) was one often used by Michelangelo, even in his later years. As well as achieving so much as a painter and sculptor, Michelangelo was also famous as a poet, engineer and architect. He was indeed a lifelong learner, always trying new things, always perfecting his skills and pushing the boundaries.


No, I am not in Michelangelo’s league in any way!  But I definitely relate to that little sentence ‘I am still learning’! In fact, I realised this again only this past week, as I struggled to understand what my daughter was explaining to me about buying a second website domain name and requesting the providers to ‘point the domain’ in a particular direction, according to which company was hosting my new site.
‘Oh, it means if someone pops your domain name into the internet, then the people who hold it will know where to send them ... it's like putting an address on a letter so the postie will know where to deliver it.’

Then I began thinking. Since I started my writing journey in 2004, I have learnt many, many new things. Back then, I had no real idea how one was supposed to go about writing a novel. I had studied some English in my original university degree. I had belonged to a couple of writers’ groups over the years. I had attended short courses and seminars at the NSW Writers’ Centre. I had read books and online articles about writing. And I had certainly written a wide variety of things, including teaching materials, studies, sermons, short stories, innumerable essays—and many, many letters. But there was so much more to learn, I discovered. Yet now, having written six novels, I find there are so many more aspects of writing I have yet to grapple with and master. Yes, Michelangelo, I too am still learning.


But it is in the area of book promotion, particularly via the internet, that I have had to learn the most. When I began selling my first novel, I did not even have a website initially. A few years later, I can remember very reluctantly becoming a Facebook convert. In mid-2009, I began my own personal blog and since then have written over 150 posts for that. I then joined a couple of group blogs and began posting there when my turn came around. I also joined Shoutlife and Goodreads somewhere along the line. And now I have an Amazon author page as well. What will be next, I wonder? Not Twitter. I refuse to ‘tweet’!
But my steep learning curve has also extended beyond the internet. Last year, I experienced being interviewed via phone for a couple of radio programs. That was indeed a novelty. Now this year, I took part in filming a book trailer for my upcoming non-fiction book—despite being convinced that is one skill I could well do without.
The things I need to learn never seem to end. Yet would I have it any other way? God has much more for me to do and say and write yet, I believe. So it is up to me to do my best and to follow God’s leading in it all, to listen and learn and trust God will guide and undertake.
Trust in the Lord with all your heart and lean not on your on understanding; in all your ways acknowledge him and he will make your paths straight. Prov 3:5-6 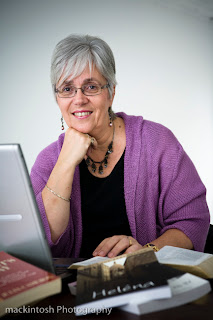 Jo-Anne Berthelsen lives in Sydney but grew up in Brisbane. She holds degrees in Arts and Theology and has worked as a high school teacher, editor and secretary, as well as in local church ministry. Jo-Anne is passionate about touching hearts and lives through both the written and spoken word. She is the author of five published novels – Heléna, All the Days of My Life, Laura, Jenna and Heléna’s Legacy. Her first non-fiction work, Soul Friend: the story of a shared spiritual journey will be released in October and a sixth novel, The Inheritance, in 2013. Jo-Anne is married to a retired minister and has three grown-up children and three grandchildren. For more information, please visit www.jo-anneberthelsen.com.