The notes of the Westminster chimes echoed down the hallway, subtly weaving their way into my sleep-sodden psyche, insisting I relinquish my cherished nana-nap. Before dozing off, I'd been researching the etymology of the word yarn. Though I'd discovered a miscellany of interesting facts, the art of spinning the various threads of thought into the fabric of an etymology essay had proved frustratingly elusive.

During my sleep, the various notions had entwined their fibres with the cords of my subconscious and I dreamed about my grandmother. I was only six when she passed away at the age of eighty-eight so my memories of this elegant, elderly white-haired lady are tender but fleeting. From what the family have told me, she could be quite a mimic and story teller when she had a mind to do so. Her life experiences growing up as the youngest daughter in a pioneering railway family provided rich pickings for a teller of tales and she could spin a good yarn. With sheer joy, she recalled ‘playing with the piccaninnies' as a child, her way of describing her indigenous playmates who lived in the bush surrounding the railway camps. As her body aged, her mind returned to the happy days of her childhood and stayed there.

Some of my happiest memories of her revolve around the parcels she regularly sent to us by mail, each one a brown-paper package filled with a dozen or more crocheted woollen doilies. Each doily was about the size of a child’s palm and made from a variety of mismatched knitting yarns. As age progressively deconstructed the coherent threads of her life, Grandma painstakingly constructed these gifts of love for us. Most people would have smiled at the collected offerings, while thinking sadly to themselves, ‘These are quaint; pretty, but useless.’ My mother saw these gifts as an opportunity. She set me the task of deconstructing the doilies to recover the essential yarn. Then she patiently taught me how to knit and crochet with that same yarn. 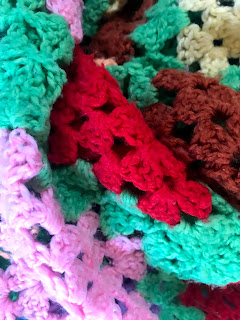 Poets and creative writers are prone to explore the art of effective written expression by deconstructing the work of others. We observe the methods used by those who effectively weave threads of information into picturesque literary tapestries. We dissect a piece of literature into the strong warp yarns which provide continuity and cohesion, and the colourful variety of weft threads, the interwoven literary devices which convert themes into stories. The metaphoric imagery of spinners and weavers converting fibres and threads into fabric coalesces so well with the work of writers that it has become part of our language and our literary terminology. The poetic trochee comes from a Greek word which means ‘a running, spinning foot’.  If I say, ‘That’s a good yarn’, my listener is more likely to assume I’m talking about a good story than a thread for constructing quality fabric.

Writers and story-tellers spin their yarns with an added twist; a funny story might leave you in stitches. Forum posts follow threads. Philosophers speculate that language forms the fabric of culture and society.

Dictionaries expand the word yarn into

1. a thread made of natural or synthetic fibres and used for knitting and weaving;

2. a continuous strand made from glass, metal or plastic;

3. a loosely twisted aggregate of fibres, as of hemp, of which rope is made;

4. a tale, especially a long story of adventure or incredible happenings.

The word yarn comes from the Old English word, gearn and the German word garn. Both mean ‘a spun fibre’. It also reflects the Old Norse word gorn, meaning gut, Lithuania’s zarna, meaning entrails, and the Greek khorde which refers to the intestine or gut-string. Clichés and colloquialisms have stitched this spurious connection into our everyday language, spinning us along, pulling the wool, fleecing the innocent, weaving a tangled web of intrigue and deceit.  Bound by a guilty conscience? Got a knot in your stomach? The spin doctors say, ‘Talk it through. Tell your story. Spill your guts!’

To understand how the word yarn became synonymous with a good story, we must look to the days of tall-masted sailing ships and the strong ropes needed to rig and unfurl the sails. Rooms called yarn lofts were set up near boat harbours. There, groups of men would work together, day after day, twisting yarns of hemp into rope. The work was tedious and time-consuming. The men passed the time by telling tall tales; tales of the sea, tales of adventure, tales of life and of love lost and found. The yarn spinners became the story tellers.

My grandmother’s parents sailed from England to Australia in the 1860s on a ship called the Melmerby. Their first child, a daughter, was born at sea and, in an interesting twist, was christened Melbebe (pronounced mel-baby) after the ship. The family of three disembarked with all their worldly goods onto the banks of the Bremmer River in Ipswich, Queensland. While my great-grandfather sought out a wagon to transport his family and chattels inland to the Great Dividing Range, someone stole their belongings. Stripped of everything except the clothes they wore, their plans for a smooth transition to pioneering life rapidly unravelled. Undaunted, they rolled up their sleeves, established a pattern for survival from the patchwork of opportunity Australia presented, and raised a large family together. That is until, at the age of five, their youngest child—my grandmother—found her mother ‘asleep’ in front of the fireplace. Grandma remembered patting her mother's hand, saying, ‘Wake up, Mummy. Wake up.’ Her mummy never did wake up. Grandma’s sister, Melbebe, became mother to the motherless siblings, all ten of them. Their consolation came from knowing that, because of their shared Christian faith, death was merely a temporary break in the thread of life. 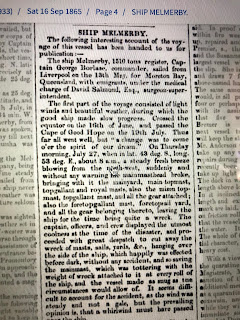 As a child and an adult, I listened to and reminisced over family stories like these—happy and humorous, poignant and sad, like dye to cloth or embroidery for embellishment, they coloured, enlightened, and enlivened my collective understanding of who I am. Their stories helped to connect me with the rest of humanity, past and present. I’m grateful for the storytellers. And for the scribes! While preparing this blog, I was delighted to find a Brisbane Courier Mail newspaper report on Trove about the Melmerby’s voyage from Liverpool to Moreton Bay in 1965. It revealed that, despite life-threatening events that occurred during the voyage, (including a whirlwind that destroyed masts and rigging), ‘a weekly newspaper, called the Melmerby Gazette, was published every Saturday night, which was a source of much amusement and interest’. Fancy that! The storytellers had been busy aboard ship. 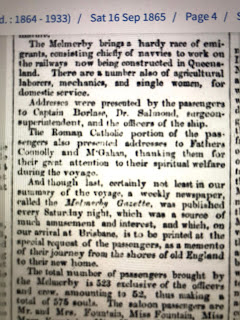 I also learned, with sadness, that the Melmerby was shipwrecked some twenty-five years later on a journey from Canada to Scotland; having recently read the opening Nova Scotian shipwreck scene from Nola Lorraine’s debut novel, Scattered, I felt an eerie sense of connectedness to the terror described in both accounts. There is no doubt that written words can be invaluable and powerful.

2020 has certainly shaken our degree of comfort and security as the normal patterns of life and community have been torn and shredded by a global pandemic. Rising confusion and violence, political controversy, heartache and death are rife. While news and views about these abound, truth has been harder to discern. I’ve been tempted to plug my ears with my fingers and sing la-la-la. Loudly. In the midst of such momentous and catastrophic times, when Earth itself seems to be unravelling, is it still appropriate to pause and enjoy the finer pleasures of good conversation, story-telling, poetry, prose, literature? Can we justify our desire for … a good yarn?

I say, yes. A thousand times, yes. Perhaps more than at any time in history, the power of positive words and stories is exactly what we need to help us navigate the stormy seas and isolating hardships of these challenging days.

Perhaps, if our ancient forebears had been content with the sheer joy of conversing with their Divine Creator as he walked with them in the Garden of Eden, if they’d listened to his stories, clung to his every word, ignored the persuasive web of deceit spun by that crafty serpent, there would have been no blood shed, no need for a word to describe the entrails of animals, no need for the spinning and weaving of yarn into fabric … no death to rule over us with such a tragic end.

How grateful I am that the Apostle Paul recorded the following good report:

“But let me tell you something wonderful, a mystery I’ll probably never fully understand. We’re not all going to die—but we are all going to be changed. You hear a blast to end all blasts from a trumpet, and in the time that you look up and blink your eyes—it’s over. On signal from that trumpet from heaven, the dead will be up and out of their graves, beyond the reach of death, never to die again. At the same moment and in the same way, we’ll all be changed. In the resurrection scheme of things, this has to happen: everything perishable taken off the shelves and replaced by the imperishable, this mortal replaced by the immortal. Then the saying will come true: Death swallowed by triumphant Life! Who got the last word, oh, Death? Oh, Death, who’s afraid of you now? It was sin that made death so frightening and law-code guilt that gave sin its leverage, its destructive power. But now in a single victorious stroke of Life, all three—sin, guilt, death—are gone, the gift of our Master, Jesus Christ. Thank God!” (From 1 Corinthians 15:53-57, The Message)

That’s a future I anticipate with delight. When that time comes, I wonder if I’ll find Grandma still working with yarn? At least in that place of no more trouble and no more tears, I know it will be a good yarn.

What about you? What good yarns have you read, or heard, or told lately? 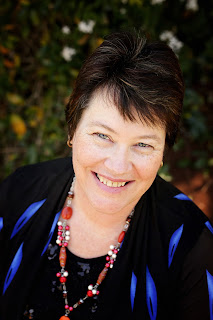 Mazzy Adams, a published author of poetry, fiction and creative non-fiction, has a passion for words, pictures, and the positive potential in people.