How to answer the biggest question writers get asked ...

If you're a writer reading this, you've probably been asked this question as many times as I have.

What do you write?

Over the years I've found that people's engagement with that question - outside of the infuriatingly common 'I'm going to write a book one day' - depends on my answer. If I answer by genre, the conversation is short. "You write contemporary? Great! <cue silence>" That's also taking into consideration that I don't really have a clear genre. My novels are set in contemporary society, but with an edge of magical realism. They're kind-of contemporary, and kind-of speculative, but not fully either. That shows in the award nominations I've received in the past two years in the USA - they're across a range of categories.

I've also answered that question by the style of my work. I did that for a while - saying that I wrote short(ish) novels. Or I write modern-day parables, which are essentially what The Baggage Handler, The Camera Never Lies and Where the Road Bends are.

But how do you get people interested in what you write, particularly if you're a Christian writer with a message to share? I've now changed how I answer that question, and it's based on a deeper question than 'why do you write?' That question I delve into is WHY I write.

So now when people ask what I write, I respond with something a bit deeper: "I write stories that help people look a little deeper into life." Or "I write stories that ask questions about the reader's life." That's opened up a whole new way of talking about my novels, and it also gets to the heart of what I consider my ministry as a Christian writer. Now a conversation will go:

"What do you write, David?"

"I write stories that help people look a little deeper into life."

"Well, The Baggage Handler is about three people forced to face the baggage they didn't know they were carrying ..."

And then a conversation breaks out about dealing with ... stuff. The person on the other end of the conversation almost always talks about the baggage a friend of theirs is carrying ... and we're having a deep conversation. It's a way to introduce the values I write about without being pigeon-holed - especially by those who don't respect Christian fiction. (And in my experience that is more common  from those inside the church, which I find sad).


So how do you answer that question of what you write? What answer could you give that opens up all sorts of conversations about the work that you bring to the world? 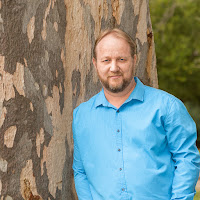 David Rawlings is an award-winning author based in South Australia. His first novel, The Baggage Handler, published by HarperCollins Christian Publishing, was named best debut Christian novel of 2019 in the Christy Awards. He writes modern-day parables that combine the everyday with a sense of the speculative, addressing the fundamental questions we all face. His third novel - Where the Road Bends - is now out.