Whatever could go wrong? A pantster tale by Jo Wanmer

It was a great idea. Whatever could go wrong? 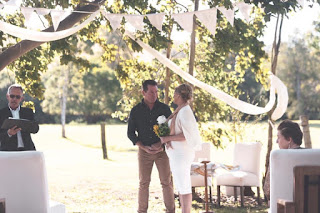 ‘I’ll make your wedding cake. Would you like a two-tiered cheesecake decorated with fresh flowers.’ It was my idea. The bride loves my cheese cake so jumped at the offer. At least we had one thing organised for the wedding that was bearing down on us. A wedding organised by a pantster!

She had a general idea of what they wanted. Casual, and held in their back garden. A grazing table. She was confident it would all come together, but we agreed we really needed a plotter – someone with a plan. Somehow it never happened.

Are you a plotter or pantster? I suspect our writing styles follow our personality types. Are you a carefully organised list-maker? I’m guessing your writing would happen the same way.
Or are you an impulsive, last minute, throw-a-function-together sort of person? I am and I write that way. Of course there are many different personality types and many writers who mix styles very successfully.

But back to our two tier wedding cake. I could see it, covered with cream, smooth sides, soft flowers flowing down from the top to the cake board. It would be so pretty. When I was mixing the beautiful, rich, fluffy concoction, I began to think the model through. Can one cheese cake hold up another? The answer was obvious. No. But there is always a solution. I’d leave the lop layer on the base of the spring form pan and support it with shortened skewers. I walked around the garden and checked for flowers a couple of days before. Yes, I felt organised and so I ignored my daughter’s pleading to make a trial one.

In the middle of the night before the big day, I wondered if soft cheese cake would hold the skewers upright.  Would the biscuit-crumb sides cave in under pressure? I dreamt I should wrap it in sandpaper and smooth cream over the rough side of the paper. In other words, I suffered a pantster panic! 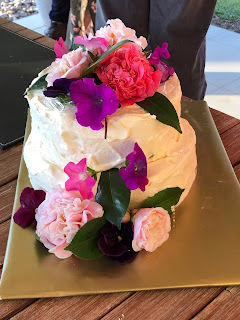 Undaunted, I whipped the cream, having researched how to stabalise it. I washed flowers and leaves, packed everything ready to be assembled on site. Ever cautious (haha) I decorated the top tier, covered the bottom tier with cream, and carried them separately to the table to finish the work of art. Yes, it worked. The bottom cake held up the top tier. The flowers flowed. It was beautiful.

But…The groom wasn’t quite ready to cut the cake. Then he wanted it moved to another table. Eeeekk. But he was the groom. So with much trepidation I moved it. More minutes passed. This was when I realised making a gelatine based cake wasn’t the smartest idea. It needed a refrigerator. I held my breath. Finally, the bride and groom stood behind the cake and I  began to breathe. But no, they launched into speeches! Others clapped. I prayed.

At last. The words I was waiting for. ‘We will now cut the cake.’ 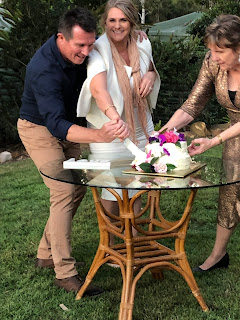 I ran and caught it on the slide. I held the top tier while they cut the bottom one – the one that had disintegrated on one side, the side away from the crowd.  It caused a lot of merriment and the guests ate every last bit – even creeping into the kitchen to clean the board with spoons.

As I think about this disaster, or near disaster, I am reminded of my writing, of my book in progress. It’s been stalled for a long time. I had a plan for it – a one line plan. From there I’ve written by the seat of my pants. As I’ve progressed, the story has taken on a life of its own, as books do. Dan has run into many adventures I had never imagined. The only planned event was Dan’s encounter with God. Not just learning about Him but having a life changing experience of the living God.

And now Dan is ready, the plot is ready but this pantster is clueless of how to proceed.

In a previous book, my protagonist found herself locked in a remote hut. When I returned to my manuscript the next morning I realised the whole story was locked up with her. She told the story. Hers was the only point of view. I spent four days wandering around muttering to anyone who would listen, ‘Milly is stuck in a hut and I don’t know what to do.’  Just as the whole plot was about to slide (read hit delete button) the penny dropped. There was a reason for her being there. A great reason. A plot solving reason. My fingers once again flew over the keys.

So now I’m circling this current work in the same way I watched the cake. God encounters are usually orchestrated by God himself. I’m out of my pantster depth. I’m hoping the Spirit gives me revelation soon or maybe this bit of creativity may slip away as well. 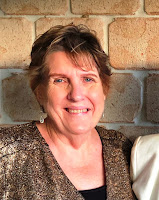 Have you had any pantster disasters or are you all calm controlled plotters? Please share your adventures.

Jo Wanmer has decided to give up organising weddings and return to her computer. She is thankful for editors who catch most disasters before publication. She lives with her husband of 48 years on the northern outskirts of Brisbane. Her book, Though the Bud be Bruised, was published 7 years ago. Three other manuscripts are currently recovering from pantster writing and being edited by her plotter brain.

These thoughts were bought to you by Jo Wanmer at 06:00

Email ThisBlogThis!Share to TwitterShare to FacebookShare to Pinterest
Labels: Jo Wanmer, pantster, plotter, Though The Bud Be Bruised