What an eel showed me 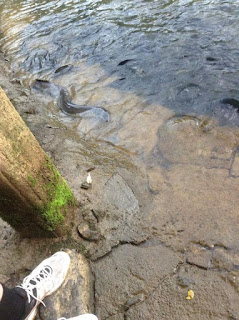 We've recently returned from week in far north Queensland, where we saw many great attractions. At Paronella Park the kids were given food to feed the fish on the property as part of the entry fee. The water turned out to be teeming with big, eager fish, crowding over each other to get closer to the front. Several of them had to flip onto their sides when it got too shallow to keep swimming. Then suddenly, there was a great, healthy eel in the race, slithering her way through and waiting for the next throw, just like all the fish. She even slipped right across my toes. At that moment, I changed the idea I'd always had about eels. Without much evidence, I'd imagined them to be brainless, slimy creatures which some people like to eat. This one was more like a cute little girl begging, 'Choose me, choose me!' (Our tour guide told us that all the eels on the property are female, and the males can be found further out to sea.) Her skin was sleek and glossy and her reflexes were finely tuned.

As a race, we humans make judgments and stereotypes so automatically. It's not our fault, but partly how the human brain is wired. I remember learning in Psychology that we make sense of the world by mentally storing things in boxes, even when the things we think we believe aren't necessarily true. For example, I neatly tucked eels away in the same category as the creepy, slime-dripping jellyfish I used to strike when swimming. This tendency can be useful, especially during our early years when we're making sense of the world. However, it has the potential to severely limit us if we let it keep going unchecked for the rest of our lives. It can be bad for the people, places and things we're unconsciously judging, as there's nothing more frustrating than trying to change minds which are set like concrete. It's also really sad for us to live in the narrow, rigid parameters we set for ourselves.

I believe we can open up new vistas of thought for ourselves, when we make a point of remembering that it's not an entirely predictable world, but one in which people and critters have the potential to surprise us all the time. That's where good writing may play its part. The type of books I enjoy reading are those which are fresh enough to challenge the opinions we've already made. The pens of the authors also turn out to be tools which help us hammer and chisel cracks into our discrimination, prejudice and automatic assumptions.

The people of first century Jerusalem had their fixed notions challenged. They believed that everyone who had his life shortened by the sentence of crucifixion was a no-good menace whose name would sink into obscurity, never to be heard of again. Were they wrong!

I've come across people who have told me, 'I never read fiction, because it's a waste of time, when you can be reading so much better material which is actually true.' They don't realise they've adopted the mindset that fiction cannot possibly hold its own sort of truth. Then they deprive themselves of a whole wealth of literature which might have the potential to move them deeply.

The man who built Paronella Park was a visionary who ignored stereotypes himself. Jose Paronella was a Spanish migrant and baker by trade, who fulfilled his childhood dream of building a fairytale castle on his property. His pragmatic neighbours told him, 'It's just weird to do something like that here in Australia,' but he didn't listen to them. I'm glad those fish and eels are finding it such a fertile place to live so many years after his death. 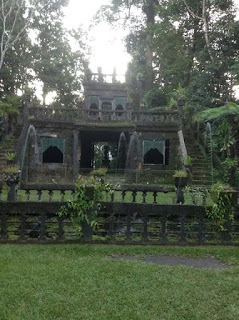 I want to keep training myself to watch out for extreme reactions which cause an emotional response to rise in me, and ask myself, 'Have I really got the facts right this time, or is it another eel?'

Have you noticed any eel reactions over the years, in yourselves or others? 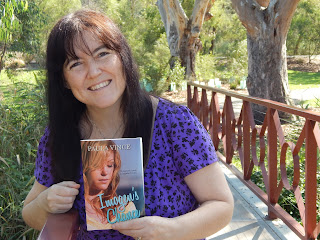 Paula Vince is a South Australian author of contemporary, inspirational fiction. She lives in the beautiful Adelaide Hills, with its four distinct seasons, and loves to use her environment as settings for her stories. Her novel, 'Picking up the Pieces' won the religious fiction section of the International Book Awards in 2011, and 'Best Forgotten' was winner of the CALEB prize the same year. She is also one of the four authors of 'The Greenfield Legacy', Australia's first and only collaborated Christian novel. Her most recent novel, 'Imogen's Chance' was published April 2014. For more of Paula's reflections, you may like to visit her book review blog, The Vince Review.

These thoughts were bought to you by Paula Vince at 05:00