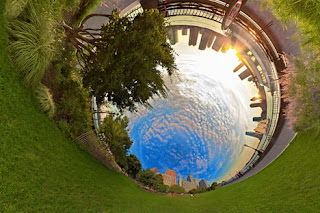 This post is not about writing – essentially – but it is about something that may influence your work as a writer. It’s about Satan’s war against God from both a global and a personal perspective. Have you ever read a book and thought, “Every Christian should read this!”?
I have, but only a few. 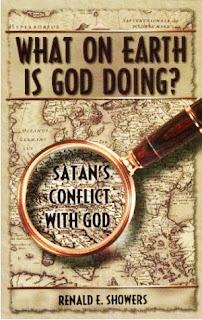 Renald Showers’ What on Earth is God Doing: Satan’s Conflict with God is one of those few. It’s a quick trip through history as recorded in the Bible – from Adam and Eve to the end of this world. "Nothing new in that," you may say. True. But the perspective is surprisingly new and invigorating: it uncovers the active, ongoing, spiritual war behind the scenes of human history. For those of you who are interested in spiritual warfare, and especially its influence on church history, this book is one you would not want to miss.


It’s a fascinating read because it reveals the moves of God, the counter-moves of Satan, and the subsequent conquering moves of God. We all know who the winner in this war will be, and we also know many historical facts, but ahhh… the impact of a new perspective!


Reading this book has re-awakened my awareness of Satan’s hidden influence on world affairs and – in our personal realm - the lives of those who are dear to us.


I recently had the opportunity to witness Satan’s hold on a person that is very dear to me: my father.  I took a couple of months out of my busy schedule to fly overseas and spend time with my dad who is nearing the end of his life. Trying one more time to lead him to Christ had priority over everything else.


My father is not an atheist, but he isn’t a Christian either – despite being christened and confirmed in a traditional church. He bases his hope of acceptance by God on his baptism and on leading a ‘good’ life because that is what he had been taught.  If you were to ask him if he’s a Christian, he would certainly say, “Yes.” But in reality, he has no awareness of his own sin and need of salvation. And despite an occasional church attendance and reciting the creed of faith with everyone else in the pews, he neither understands who God really is, nor does he know Jesus as his Saviour. And therefore he has no pardon for sin – another victory won by Satan through planting strategic lies. What better way of leading many people to hell than by propagating false teachings among the leaders of organised religion?


Can you understand how angry I feel towards churches that make false promises? Being baptised as a baby and leading a ‘good’ life means nothing without personal faith. Every Sunday people’s consciences are soothed when they make a routine confession of sin and think they are forgiven by this ritual prayer. They even confess a faith that they don’t possess. It’s a kind of universal salvation thing. And sadly, most of their teachers never tell them that they will spend eternity in hell if they don’t personally turn to Christ in repentance and faith. Heartrendingly, my father is one of the many who are blinded by Satan in this way.

So far my trip has not (yet) yielded its desired fruit. But it has made me acutely aware once again of Satan’s moves to hinder God’s plan of salvation and has inspired me to speak out wherever I can. So here I am, speaking out... Read Renald Shower’s book – it may change your perspective on spiritual warfare, and in so doing it may influence your writing.

For those who are interested, this book is available freight-free from 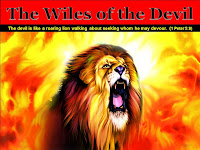 
And if you are interested in how Satan works in the life of believers, watch "The Wiles of the Devil" video on Vimeo   http://vimeo.com/26658500

With love from one of God’s soldiers,

Margaret is a Christian Counsellor, Educator, Author and Speaker.
Visit her website for free resources and an evangelistic 'Truth Matters' page.
http://drlepke.com.au

These thoughts were bought to you by Margaret Lepke at 18:41