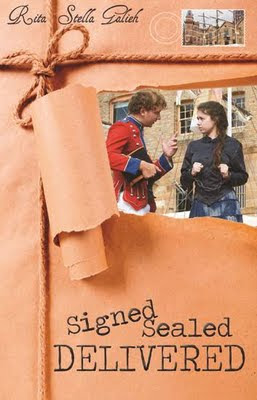 This Historical Romance has been some years in the making. I've come to really know and understand why my characters
act the way they do. As in real life, their past has so much to
do with their present.

As an art student I'd wander through the cell-blocks of the Old
Darlinghurst Gaol wondering about its previous inmates. I'd
heard about the infamous Bloody Code and how it was enforced. Incidentally, the famous 19th century actress, Sarah Berhardt was given a tour and it highly amused her to discover the jailor's cat was in reality a cat-o'-nine-tails!

Years later, after simmering away in my subconscious, the idea
for this story had me scrambling to do some thorough research.
Scrolling through various Ticket-of-Leave documents, I found my heroine, and as they say, "the plot thickened". I knew it was a real saga and only a trilogy would capture all the various twists
and turns in her life and the life of those she loved. Also, in a
marvellous God-incident one eventful day I "happened" to attend a High Court hearing of a murder case. The court room had apparently been built early in the 19th century which gave it the exact atmosphere I could have wished for. I hung on every word of that judge and from notes taken, I was able to quote much of the judge's manner in the handing down of his verdict.

As in so many historicals, the story begins in England. And on our return from an evangelism conference in Amsterdam, my husband and I spent 3 short days in London. We traipsed the back streets, lanes, parks, and famous landmarks all part of 19th century London Town. We visited the British Museum and Windsor Castle and the details I gained from soaking up the atmosphere in those particular places I used to great advantage in Books II and III. Being there is great, but if you can't manage the travel, an author's fabulous 21st century tool, the Web, is a far cheaper and more convenient alternative.

Signed Sealed Delivered, released  Sept. by Ark House Press, is Book I of the Watermark Women Trilogy. You can pre-order from Koorong or Christian Bookstores.

Read Prologue and Excerpt at www.ritastellagalieh.com/books.html