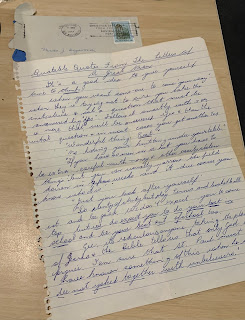 Old writings hold much wisdom. The above quote is stored in my memorabilia under the heading of ‘Quotable Quotes from the Letters of a Great Man’. A great man in my eyes, for he was my father and his letters became treasure after he died.  At the time I attended Rockhampton Girls Grammar as a boarder, enabling me to complete years 11 and 12. My mother wrote to me twice a week without fail. Everyone's letters were distributed after our evening meal. They were our only contact with our parents. A black  phone languished on the wall in the entry but we girls never dreamt of touching it. Letters were our connection and daily highlight.

My dad on the other hand only wrote occasionally. His short letters were eagerly awaited, even if his spider scrawl was hard to read.  He died half way through year 12….and the letters stopped. The few I still had I kept for about forty years, and then I reduced them to a few quotes.

Mum’s letters detailed her daily life. Dad’s letters taught me how to live my life.

“If you have 40 men in a hut you have to be extra careful with money and other easily stolen things. But you can usually narrow the field down in a few weeks and in due course you know who it is.”

I can’t remember what I wrote to elicit this response but he used the occasion to teach me.  As I recalled his writings after his death, I realized he was trying to prepare me. Did he know his time was limited?

The other author I honor today diid know his time was limited. He wrote with passion to his ‘family’, teaching and exhorting them, cajoling and rebuking them, loving them and discipling them.

But he didn’t write as I do from the comfort of an airconditioned room, office chair and keyboard. Or as my dad wrote from his messy office desk shoved in a tiny room, using the few minutes he could find in his busy life as a pastoralist and farmer. 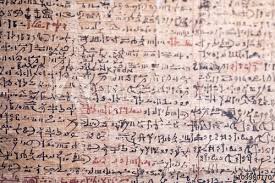 Paul wrote from prison, shackled in chains. The only contact he had from his beloved people was by messengers bringing reports and letters. His eye sight was so bad that when he wrote in his own hand the letters were huge. He relied on a scribe. I’ve often tried to imagine what drove a man, who had lost his freedom, to write passionately about freedom that's available to everyone. How did he keep his mind on things above when chains and mud shackled his feet? ( image from adobe.com)

He dictated and his scribe wrote one copy. Paul didn’t safely file the original and send a copy. He sent the only copy and told his family to share his letters around. The first group couldn’t photocopy it so they either released it or someone sat down and copied it, maybe once, maybe twice. Somehow, nearly two thousand years later, there are millions of copies of those letters. they are important to our faith to this day.

Why did Paul persevere under such heavy difficulty? Did he know his letter would be read for centuries? I don’t think so, but still he was used by God in an impossible situation to write words that minister to me today. What inspired him to rise above his circumstances and write?

Some say he was instructed by the Holy Spirit and I’m sure that's correct. But how did that instruction happen? Was it a still small voice in the middle of the prison clamour? A Dream? An angelic visitation? I don't think so.

His writings make it clear he was a man like you and I. Often he was led by circumstances. In this case, he was bodily confined but his spirit was fired by his passion. The same fire that drove him to persecute early Christians, now drove him to call Christians to higher heights. The anger that killed Jesus' followers was now being used to destroy the religious spirit that wanted to remain, mixing and perverting the new way. A man that writes, ‘I wish you’d go all the way and castrate yourselves!’ is still a passionate man of zeal.

And I suddenly realise that passion for my message pushed my first book to publication standard and into print. I wanted the world to know what God did for me. It also explains why my other books languish, waiting. The passion isn’t strong enough to push me past the obstacles of publication. Or is it a fear of judgement of beliefs I hold passionately?

In a few blogs in the last weeks, some of our writers talk of the struggle to write this year - even though in a way we, like Paul, have been confined. Maybe we are in the hush before the storm, the rest before the race, the preparation before production? I believe God is working in each of our lives and He will bring forth a flurry of words in His time.

What about you? What makes you write and persist until the words are good enough to engage and delight a reader? What pushes you past the endless obstacles to get a book in print?

Jo and Steve Wanmer live just north of Brisbane where they do   business, ministry and life together. They share their home with          Barclay, a lively toy poodle, who demands much love and many   walks.  Jo's award winning book, Though the Bud be Bruised, was published six years ago. Other manuscripts are either in rough draft, edited draft, on scraps of paper or in her head. It has been a quieter year for her, as for many - a time to reflect as she enters her seventh decade.