Question 1: Tells us three things about who you are and where you come from.
I come from Sydney. Up until this year I was always a bit scornful of S.A.’s lawful tendencies but since Covid19 I’m loving it. Lawful good people really come into their own in a pandemic.
I get emotional. Like really emotional. I once had a lecturer tell me that if I got any more enthusiastic, I’d need chemicals. Combined with a generalized anxiety disorder it makes for a rollercoaster of a life. That’s where faith really helps. I once read that the opposite of faith isn’t doubt it’s control and I think that’s true. I’ve learnt to let go of any attempt at control and to trust God when I get anxious. That and prayer (mine and others) gets me through the dark times. And the good times are ‘dancing down the street’ amazing. It’s an amazing world we live in.
I live in my imagination. I created a Facebook page for an imaginary person before I created one for myself. I can tell you the Hogwarts House for the mc of Shadowalker (Gryffindor despite being the Death Lord’s daughter) but I’ve never bothered to do the online test for myself. My second youngest daughter was named after a character on Meldin (where Shadowalker is set).
And my name. I’ll tell you the story I don’t tell anyone. People ask me where the name Catch comes from and I tell them it’s an old nickname I adopted officially and that’s it’s based on the book Catch 22. And that’s true. What I don’t tell people is the person who’s nickname it is doesn’t officially exist. It was Danielle Warwick, the narrator of a book I started in my teens who—like me—loved the bitter irony of Joseph Heller’s Catch 22 whose nickname I adopted.
That’s who I am, a person whose real name belongs to an imaginary person.

Question 2: Tell us about your writing (or editing/illustrating etc).  What do you write and why?
I want to write genre fiction. I’d love to be able to write exceptional Mills and Boon. And not for the money, though that would be nice, but because I’d love to conquer the craft of writing to a formula and making it good. (It’s like writing a sonnet). I’ll do it one day. But what I write now is YA. I guess I’m stuck being a teenager (see above question on who I am).
My two published books are both YA. Shadowalker was published by Stone Table Books in 2017 and the sequel Abomination is finished and will come out later this year (God and pandemics willing). Actually, you meet the four horsemen at the end of the second book, so I guess it’s topical. I wrote this because I wanted to share Meldin. I wanted to introduce people to four different types of dragon (five if you count Uriel’s ice cream eating cousin). To take them to regency balls and laser turreted castles and lifts made of Light and air and the bones of the dead. 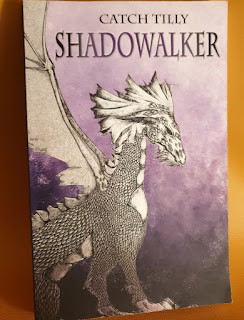 The second book is Otherwise known as Pig, published by Wakefield Press last year. And that one I wrote because I had to. It’s a violent, sometimes profane book about bullying with Christian themes (the turn around point is a book of martyrs and turning the other cheek). Christianity and the f-word, I never thought it would get published but I knew God wanted me to write it, so I did. Then, nine years later, Wakefield took it up and it’s a Glam Adelaide Pick of the Year and Katherine England at the Advertiser described it as ‘a brilliant novel. Lesson one as a writer: Trust God. 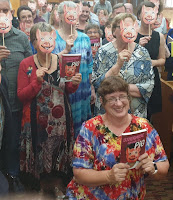 Question 3: Who has read your work? Who would you like to read it?
I want everyone to read it, of course. Because Stone Table is a small press it’s hard to get books out into the general public so Shadowalker has been read mostly by people I know but I’m hoping with the ability to create an eBook and the increase in online purchasing we can get it out there more. So, if you’re reading this and you like dragons and laser swords and a girl who walks through death then check it out. (But if you are in Australia go to Booktopia, everyone else is shipping from America.) 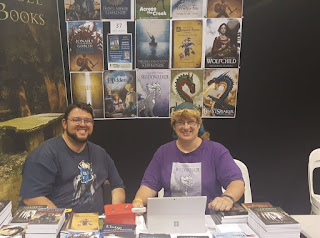 With Otherwise known as Pig I don’t know who has read it, a number of teachers, I think but the people I really want to read it are teens. I want anyone who’s been bullied to feel validated and heard, to know there are people out there who do understand. The review I am most proud of is a 15-year-old who wrote ‘the sense of satisfaction was overwhelming for a novel’. And I want the rest of us to read it and feel compelled to act when we see injustice, to help create a culture that says no instead of yes to bullying.

Question 4: Tell us something about your process. What challenges do you face? What helps you the most?
I must write in the morning. If I don’t my day is a waste of space. I don’t write fast so about 500 to 1,000 words in a day is good for me. My ‘day job’ is looking after my daughter (autistic, non-verbal) and she will usually leave me alone in the mornings, so I get quite a lot of time to write.
I think my biggest challenge as a writer is how far I get into the character. When I wrote Pig I spent 10 months thinking (and swearing) as a 14-year-old boy from one of the roughest parts of Adelaide. It’s good for voice but it means I have to drag myself out of character to understand what’s happening from outside. It’s probably why I always write in first person (a challenge in fantasy).
And confidence. Do we all have that problem? That’s where I learn on faith. My faith that God wants me to do this. God’s faith in me. And my husband who had lots of practice reminding me I am a good writer and I can do this.

Question 5: What is your favourite Writing Craft Book and why?
I tend to write instinctively and only stop and think when I run into problems so my favourite craft book (apart from Mr. Google) tends to be the one I’m reading. Right now, that’s the Master Classes on writing. I’ve just finished Neil Gamian and Margaret Attwood and am part way through Judy Blume. When I did my Master of Creative Writing, I relied heavily on Bell’s Write Good Fiction: Plot and Structure.
I’ve just purchased Rosanne Hawke’s Riding the Wind and am about to pick up Mark Worthing’s The Sacred Life of Words and considering how much I learnt from them both at Tabor I’m expecting those to become my next favourites.

Question 6: If you were to give a shout-out to a CWD author, writer, editor or illustrator – who would they be?
That’s a hard one. There are so many people I’ve been blessed to know. My first list was nine people long, so this is the short one.
Rosanne Hawke:  God knew what he was doing when he put Rosanne at Tabor. I learnt so much from her about writing children’s fiction, she was so apparent in her faith and yet she never restricted her students. It was one of my proudest writing moments when I broke the HD barrier and received 85% for my first four chapters of Pig.  And to sneak in two more, I want to mention Claire Bell (who has the amazing gift of editing for both voice and grammar and who was so much a part of making Pig worth publishing  and Mark Worthing, who made poetry so interesting that I did advanced poetry and I am not a poet. And who also published my first book (thank-you).
Wendy Noble: I really like Wendy’s writing and we share a love of intelligent, unexpected dragons. I also admire her tenacity. But I think the reason I wanted to shout-out Wendy was the way she writes. When asked: “why are the griven in your book so negative about everything?”, Wendy answered: ‘because that’s the way they sounded in my head’. Now that is a response I can relate to.
Sue Jeffrey: Sue and I were born in the same year. We both did YA novels on bullying for our Master’s (same year) and were invited by Rosanne into CWA together. We then both started working on fantasy books. We both wrote short stories about underpants for the first Stories of Life and both won prizes. (Sue came first, and I came second). In the last couple of years, we’ve been working on different projects, but I still think of Sue as my writing twin.

Question 7: What are your writing goals for this year? How will you achieve them?
Write more. 10 years ago my husband was geeking out and asked me what would writing at level 50 (a role playing term) look like for me. I answered it would be writing the books God put on my heart and let him worry about the rest of it. I keep needing to remind myself of that conversation and just write.

Question 8: How does your faith impact and shape your writing?
See above: God made me a writer; I am as sure of that as I am of any other aspect of my faith and when I write well it’s an act of faith, of letting go and trusting him.
I also hope my faith does shape my writing. C.S. Lewis said when he started writing The Lion, the Witch and the Wardrobe he wasn’t trying to write Christian literature that’s just what came out. Allegory doesn’t seem to be my thing, but I want faith to come out in my stories. In Morgan’s response to a book on martyrs or in bones encased in crystal being slowly redeemed by Light. I don’t wrote ‘Christian literature but I hope and prey I write literature as a Christian. 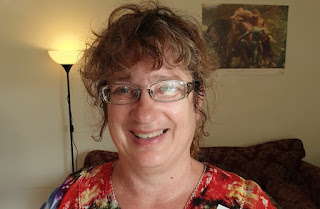