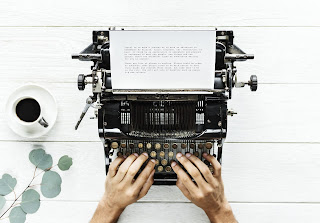 November is here and so is NaNoWriMo. By NaNoWriMo I mean National Novel Writing Month - an initiative created to inspire writers to create a short novel of 50 000 words in thirty days. Some will write in notebooks, some may write on vintage typewriters like the one pictured above and others will fire up their latest MacBook or PC. Some will write slowly using NaNoWriMo as a motivator to write every day. While others will blitz the word count in 24 hours. I kid you not.

According to the NaNoWriMo website, I've participated in the challenge eight times, but I've only 'won' it twice by reaching the 50K words in the month. I can’t say that all those words were usable at the end of that time. More like about 10K. So why do it again? Especially when I like to edit my writing as I go?
In all truth I was going to give NaNoWriMo a miss this year but then my writing group, which contains several seasoned authors, decided that they would have a go. I couldn’t back out, could I?
I decided to dive back in and see how many words I could write. I’ll be delighted to reach the 50K word count but if I can write 20-25K words I’ll happy. The thing is, I’m approaching the writing differently this year.
In the past I’ve rocked up to the NaNoWriMo site on day one, created a project and started writing. Now this may be a great strategy for the ‘pantsers’ amongst us – those who write by the seat of their pants and don’t plot. I can do that for a short story or even the first 10 000 words of a novel but I can’t seem to ‘pants’ a novel length plot.

I admire people who can, but I don’t work that way. I’m a ‘tweener’  or a ‘plotser’ – halfway between a plotter and a pantser. I work best when I have a rough outline signposting the way and a clear understanding of how the novel will end. Then I can write freely and create interesting tangents. The problem comes if they are too interesting and change the nature of the story, but that’s a discussion for another day.

This year I thought I was better prepared. It makes sense doesn’t it? If you want to run a marathon – or a half marathon – you have to plan and prepare your body and mind for the task (yes, I'm an expert on running - NOT :D). I didn’t do the writing equivalent of running 10 kms a day. I didn't even do writing sprints, but I thought about the plot and my characters and tried to get a sense of their voice and their heart.

I also chose to write a shorter novel so that it would be complete in around 50-60K words. For me that meant writing an amateur sleuth mystery based on a character I created years ago. I had fun pondering her backstory and giving her a lot more colour and depth than she had before. I didn’t get all the background work finished before I started the story, but I did do some and it made a difference.
Until… the second week hit. NaNoWriMo likes to deliver some knockout blows. One often happens in the second week – you hit a roadblock. This year, this is where the story became much sadder than I wanted it to be. It was based on a short story I wrote a while back and I fear this particular tale may work best in it's original form. I was faced with the decision: to either keep writing this story or do something different. As I'd already done a lot of character work on the first story, I decided to switch to a different novel with the same character, a month later in her timeline.
The beauty of NaNoWriMo is that you can do stuff like this. It doesn’t even matter if I finish the 50K words, or if I write 8K words in one novel and 42K works in another. The important thing is to keep writing and explore the genre I’ve chosen.
I’ve written a YA with crime elements before but not a murder mystery, so the genre is new to me but it’s a fun idea. NaNoWriMo is a great time to try something new. If it’s not the right genre for me then I’ve still had 30 days of writing practice - and that may spark other ideas I can run with.
NaNoWriMo isn’t for everyone but it can be a useful way to dong the nasty inner editor on the head and knock her out for a while. She can have her day when I’m finished with the first draft. It WILL need editing, believe me, whatever I write.
What about you, oh intrepid writers? Are you doing NaNoWriMo this year? What genre are you writing and what strategies do you use to help you create a story that works? What's your experience this year?
Let me know in the comments below. 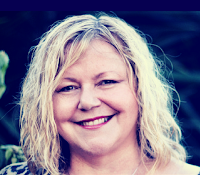 Susan J Bruce, aka Sue Jeffrey, spent her childhood reading, drawing, and collecting stray animals. Now she’s grown up, she does the same kinds of things. Susan has worked for many years as a veterinarian, and writes stories filled with themes of suspense, adventure, romance and overcoming. Susan also loves to paint animals. Susan won the ‘Short’ section of the inaugural Stories of Life writing competition and won the 'Unpublished Manuscript' section of the 2018 Caleb prize. Susan is the editor of 'If They Could Talk: Bible Stories Told By the Animals' (Morning Star Publishing) and her stories and poems have appeared in multiple anthologies. Her e-book, 'Ruthless The Killer: A Short Story' is available on Amazon.com. You can check out some of Susan’s art work on her website https://www.susanjbruce.com/animal-art .