Each Thursday in 2018 we will be interviewing one of the members of Christian Writers Downunder – to find out a little bit more about them and their writing/editing goals.
Today interview Lynn Fowler

As well as being a writer, I’m a Christian preacher, and independent publisher. I currently live in a small country town in Gippsland, Victoria, but I have previously lived in NSW and Queensland (I moved down here from the Gold Coast 13 years ago - quite a culture shock!)

I’ve been a preacher since 1975, starting 6 months after I was born again. I’ve pastored small churches and travelled around eastern Australia ministering, and over the last 30 years have done short term missions trips to 15 different countries. Between 2005 and 2015 I led an international ministry based here in Gippsland.

The publishing began with me self-publishing my own books, but who I am means that nothing I do ever remains just about me for long, so it soon expanded and I began running regular writing competitions and publishing the best entries in anthologies. (The current competition can be found at http://birdcatcherbooks.com/competitions/.) This year I hope to be publishing my first stand-alone book for another author. Why is my publishing business called Birdcatcher Books? Because my name is Fowler, and a fowler is a bird catcher.

Question 2: Tell us about your writing (or editing/illustrating etc). What do you write and why?

My Dad was a writer, and I couldn’t escape the gene pool. I can’t remember a time when I didn’t write, but I never wanted to “be a writer.” Through what was a difficult teenage and young adulthood I wrote poetry as a means of expressing the turmoil inside me, and rather to my surprise had some of it published. In my early 20s I landed a job in the publicity department of a TV studio. It was a great training ground for writing. Every week I had to produce a TV magazine of eight to ten articles. I also had to write the on-air promo for it (and, if I couldn’t con anyone else into the job, appear in the promo.) There were also other on-air promos for both TV and radio, press releases, and both in-house and client newsletters that were my responsibility. It taught me to write quickly and in a variety of styles.

In my mid 20s I was saved and called immediately into ministry, and from that point on much of my writing was an extension of my ministry. I had numerous articles and some poems published in Christian magazines in Australia, and a couple overseas. More recently I have self-published 3 Christian books: Called to Battle is a basic spiritual warfare manual, and is now only available as an e-book for my newsletter subscribers; Real, Radicaland Revolutionary is a challenge to the Church to be all that God has called us to be; and My Little Chats With God is a collection of brief, informal Bible meditations. I also have a book of my poems, Sonshine and Shadows, which is about half and half Christian and secular.

In 1990 I had a children’s picture book, A Crazy Alphabet, published through traditional publishers here in Australia and in the USA. It did quite well, but I found the whole process extremely frustrating, which is why I decided to self-publish my other books.

Over the years I have also written a small amount of fiction, and I had had the idea for a novel running around in my head for several years, so I finally sat down and put it together, and published Next Year in Huntsville last year, under the pen name of Grace L. Sutherland to distinguish it from my Christian non-fiction. At the same time, I released a small book of my short stories, Just Grace.

A number of pastors and leaders have read Real, Radical and Revolutionary and My Little Chats With God, and given them great reviews. I work a small circuit of Saturday markets with my books, and it is always a thrill when someone comes along and says, “I bought your book last time, and I loved it.” Who would I like to read my books? Lots and lots and lots and lots of people. In fact, everybody!

I am probably the most undisciplined writer on earth, possibly because, even with seven books and stacks of articles behind me, I still don’t really think of myself as a writer. Much of my writing process, if it can be called that, takes place in my head: and idea comes, it tumbles around in there for weeks, months or years, all the while gathering other ideas to itself like an unruly snowball, and eventually lands on paper. 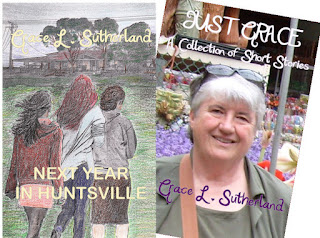 That said, I do use “mind mapping” to help me plot out the chapters of a book, and in the case of Next Year in Huntsville, because it was covering a period of 48 years and I wanted to get all the historical facts in the right places, I had a spreadsheet listing every year of the story and with columns for each of the main characters as well as world and Australian events.

Like other members, I love Story Genius by Lisa Cron. I find people endlessly fascinating, and want to be able to explore that fascination in my fiction. 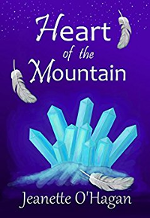 Jenny O’Hagan. I have been privileged to review two of her books, Heart of the Mountain and Blood Crystal, both of which I enjoyed immensely and which opened up to me a genre which I would not otherwise have considered reading.

I have ideas for three Christian books and a novel running around in my brain at the moment. Which, if any, of them will come together and land on paper before year’s end? I don’t know. I guess my primary writing goal for 2018 is to actually make time to do some. So far, I am not making much progress toward reaching this goal.

My Christian non-fiction and some of my poetry are directly shaped by my faith, but because my relationship with God encompasses all of my life, even my secular writing is influenced by my faith. Next Year In Huntsville, for example, though not a specifically Christian novel, has a subtle undercurrent of the search for faith and meaning. 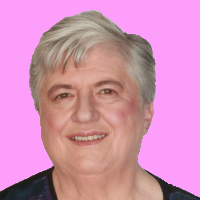 Lynn Fowler had a children’s book traditionally published in 1990, under her then name of Lynn Cox. She has self-published three Christian non-fiction books and a book of poetry under her own name, plus a novel and a book of short stories as Grace L. Sutherland. Through her publishing business, Birdcatcher Books, she runs regular writing competitions and has published three anthologies of stories for adults and one of stories for children.
Lynn can be found at http://lynnbfowler.com,
Grace at http://gracelsutherland.com
and Birdcatcher Books at http://birdcatcherbooks.com

These thoughts were bought to you by Lynn B. Fowler at 05:00