Clutter Bust into the New Year – by Ruth Bonetti

Do you embrace or resist making resolutions as you pass that annual threshold? My goal is to declutter. Not just the old year, but past decades.

It's not easy. Mess with closets and mere muddles inflate into chaos.
Breathe. Do it. Breathe.
Believe that beyond the pain threshold lies freedom, lightness of being.

Biff the business cards from superficial network functions, whose goal was to spam victims with PR. Switching computer systems messed my contacts database. So it's time to delete people I met 30 years ago for three minutes and now wouldn’t recognise. 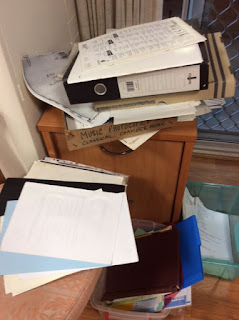 Bury those dead manuscripts in the bin. That children’s book Pipi the Pirate Parrot never found wings. What about a How-To-Get-Healthy? An early vent called Mothers Can Stay Human! Life’s caravan moved on. Now, jigsaw pieces must be hidden from crawling grandsons. Good riddance to a puzzle untouched since last Christmas holidays whose fiddly trees wasted table space. Send it to Lifeline for a retired person with time to fill.
With boxes of dusty books and colleagues’ unplayed handwritten compositions. Decades of writing and of Clarinet and Saxophone magazines. Will I keep photocopied cut-and-paste “The Squeaker Speaks” volumes that I edited back in the 80’s? No.

WHAT YOU WILL EAT


OR WHAT YOU WILL WEAR

Because I commute across two venues for work and for occasional recreation, I need gear for all seasons. Clothes, shoes, handbags. Last time I vowed “I’ll never wear that style again!” it came back into fashion. So my closet jumble repels.

Do I need so many multi-skilling hats? Or do they make me look harried, worn?
I draw a tree of my life. Erase a branch that flags effort for little gain. Why push through holiday heat and lethargy to organise and deliver that pencilled seminar? Later, when the time is right.

I enjoy pulling weeds and “farmer’s friends” that clog my garden.
What of those in my head? My heart?
Let it go. Even though pruning can hurt, and empty spaces feel vulnerable.
But how else to move forward?

Every branch that does not bear fruit he prunes so it may become more fruitful. Those that do not bear fruit wither, are thrown in the fire and burned.

This cleansing process opens space for a new thing, that way out of a wilderness of fizzled plans and failure wastelands.
Wait and hope for rivers in the desert.
Trust that new shoots will spring up. In due season, the green blade will rise from the buried grain. Rest in the Lord of the harvest.

What have you found hardest to let go of? Did declutter free you for your next ventures? 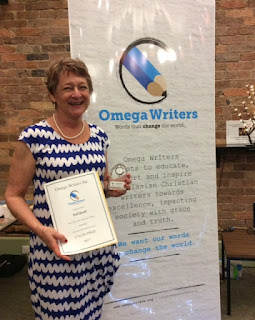 Author-wise, Ruth Bonetti is (largely) resting after her decade’s effort to publish her Midnight Sun to Southern Cross saga. The first book of the series, Burn My Letters was Nonfiction winner of 2017 CALEB Prize. She is decluttering old research for her earlier published books that help people present confident Words and Music. Available via Book Depository,  Amazon and her website http://www.ruthbonetti.com
http://www.ruthbonetti.com/burn-my-letters/
Thanks to author colleagues for reviews!
Facebook: @RuthBonetti @ruthbonettimusic
Ruth’s blog: http://ruthbonetti.musicabonetti.com
Ruth founded Omega Writers in 1992.

These thoughts were bought to you by Ruth Bonetti at 18:19