In Numbers 20:7-11 The Lord told Moses to speak to the rock so that water would pour out. But when Moses gathered the people, he became impatient and struck the rock twice with his staff. God was gracious and water gushed out, but because he disobeyed, Moses lost the opportunity of entering the Promised Land.

Moses biggest problem was he did not trust God enough. God had told Moses to bring his staff (v. 8) and Moses expected to use it to produce a miracle like he had done in the past. Just speaking to the rock didn't seem enough.

I understand how Moses felt, often it seems like my words are not enough – whether I say words, write words or even pray words. Sometimes it doesn't seem enough. I become impatient and want to do something, anything really, maybe even hit a rock with a stick.

We are like Moses in that we want to repeat something that we had success with in the past. 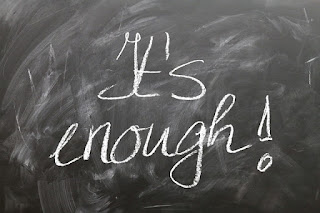 Maybe write a similar book, maybe use the same marketing plan that worked previously or maybe enlist the same people to help us again. However God might be asking us to do something completely different and it just doesn't feel like it would work. It doesn't seem enough. Yet if we don't follow through we might miss the opportunity God is opening up for us.

Later in Moses' life we see him speaking out against the men who had begun to indulge in sexual immorality with Moabite women and had started sacrificing to their gods. Moses' leadership was ineffective at this point - an Israelite man brought a Midianite woman into the camp right in front of Moses. So Phinehas (Aaron's grandson) took a spear, entered their tent and drove it through both of them (Numbers 25). It is both a violent and sexual image that many Christian fiction readers would not be comfortable with.

This incident tells us that the younger generation were stepping up into spiritual leadership but they were doing it in ways that might make older people feel uncomfortable. Likewise as writers we need to encourage a new generation to step up, even if it means they are writing scenes that make us feel uncomfortable or expressing truth in ways that are more confrontation than we would like. God rewarded Phinehas' actions because he was zealous for God's honour.

The longer we are writers the more our responsibility moves towards encouraging the next generation to write and speak whatever God has put in their hearts.

And if they communicate the words that God gives them, it will be enough.

Susan Barnes likes to write devotional thoughts on Bible passages, book reviews and inspirational articles. She loves to challenge people's thinking and regularly blogs at abooklook.blogspot.com.au. She is also a school chaplain and pastor's wife.

These thoughts were bought to you by Susan Barnes at 07:00