The early strains of my authorial inclinations arrived twenty-eight years ago, as song lyrics. Words to worship the living God rode the wings of melody straight into my spirit. Was that exciting, or what! Each new song shone with possibility. I scribbled them down, determined which chords supported the melodies, and typed up my treasures with their chords hovering happily above them: C, Bb, F#, Am, C7dim etc. Dainty letters and symbols, aren’t they? And any musician worth their salt would have no trouble knowing what chords to play. But knowing when to play them? Or what tune to sing the words to? That was a problem. You see, although I could compose the tunes, and even understand the harmonies, I had never learned to play a musical instrument (beyond a wooden recorder), nor had I developed any fluency in writing musical notation. The music might have been within me, but my ability to communicate it to others was limited.

Mind you, I wasn’t completely without options. I managed to produce music scores using computer programs, but the gap between my expertise and that needed to produce a finished article good enough to get those songs ‘out there’ seemed too wide to bridge on the budget I had. I leaned towards compromise; I told myself that even if nobody else ever heard or sang those songs, it was okay, because God heard them. He received my personal expressions of praise and worship every time I sang them, and at least He and I were blessed. And that was true. It also gave me an easy way out, especially once I heard a pastor suggest that, if our plans, or the operation of our gifts and talents, faced huge obstacles, or seemed to be thwarted by circumstances, we should probably ‘put those things on the shelf, and leave it to God to make them happen’. Hmm. Really?

All these years later, I am convinced that the pastor’s advice, albeit well-meaning, was dubious, if not downright flawed. Why? Because that kind of advice made it easy to give up, and easier to blame ‘God’s will’ for anything and everything that could’ve, should’ve, would’ve but didn’t happen. Thankfully, at about that time, the Holy Spirit highlighted some verses from Psalm 68 in the Amplified Bible (yes, he made it loud and clear) to me, including:


I decided it was risky to shelve something difficult or challenging in the hope (or presumption) that, if God wanted to, He’d make it happen. I decided it was better to trust Him to strengthen me and help me make it happen. As a consequence, I’ve learned to maintain a very large ‘pending’ file, and check it regularly. Had my stubborn and tenacious streak not underpinned my decision to persevere, in spite of many obstacles, I may never have been surprised (and delighted) to hear a congregation singing one of my songs at a church I visited just a couple of years ago – some twenty-three years after I wrote the song. 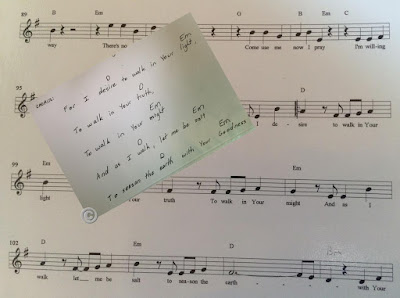 While none of my songs were ‘published’ in the traditional sense, over the years a number of them were heard, and sung, by a wider audience than just me and God. What’s more, writing those songs seeded my passion for writing poetry and lyric essays, which I have had traditionally published. In fact, two of my poems are being published today, in the Glimpses of Light anthology. I love the spirit behind the following comment from the anthology’s acknowledgement page:

‘Glimpses of Light began as an inkling of an idea last year …
At first we put it in the ‘too hard basket’, but the idea just wouldn’t go away.’

Wouldn’t it? It might have, if our dedicated Editors, Jeanette O’Hagan and Nola L Passmore had shelved the idea before it got off the ground. But they didn’t. It might have, if the many authors who have contributed stories and poems had buried their creative talents at the back of a shelf and left them there. But they didn’t. It might have, without the encouragement and effort of everyone who helped to make this project happen. But encourage and help they did. It might have, if the enemy’s plans to prevent these ‘stories and poems of imagination and hope’ from reaching the hearts that will be inspired and healed by them had succeeded. They haven’t so far. (Let’s keep it that way by spreading the word far and wide.) And finally, it might have, if God had not answered our many prayers for wisdom, guidance, strength, and protection, time and again. But He did. And guess what? Glimpses of Light has HAPPENED! 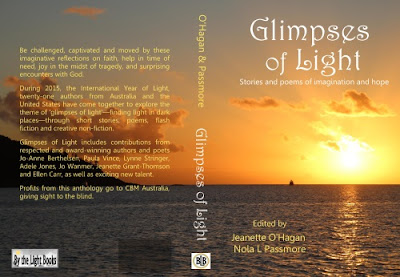 Now, the music of hope fills the pages of an anthology. And our ability to pass it on to the world is only limited by … the good intentions we shelve and the actions we don’t take. Will you add your abilities to the mix now? Help us get this gem of good news and encouragement out to as many people as possible? Yes? Thank you so very much. May God strengthen you as you do, just as He has already strengthened what He has wrought for us. And may He give you the encouragement and strength you need to move your projects, your gems, off the shelf, out of the ‘too hard’ and/or ‘pending’ baskets and on to a world that is waiting to see them shine.

Need a little more persuasion? Perhaps the words from Jeremiah 50:2a (Amplified Version) may help to convince you, as they once did me: ‘Declare it among the nations and publish it and set up a signal [to spread the news] – publish and conceal it not; say, Babylon has been taken.’
Why, I’ll even give you some links, to make your task of acquiring and promoting the Glimpses of Light anthology easy. ;)

Finally, why not re-establish a link with some of your own projects that have languished on the shelf, or in the too hard basket? At the very least, relocate them to a pending file, at least in your mind. Then trust God to strengthen you, to help you see them through. As they say, nothing ventured, nothing gained. What have you got to lose, other than a shelf full of clutter?

Mazzy Adams is an Australian wife, mother, grandmother, creative and academic writing tutor and published author with a passion for words, pictures and the positive potential in people
Website: www.mazzyadams.com
Email: maz@mazzyadams.com