Christian Writers Downunder is excited to announce the cover reveal of the Glimpses of Light anthology. 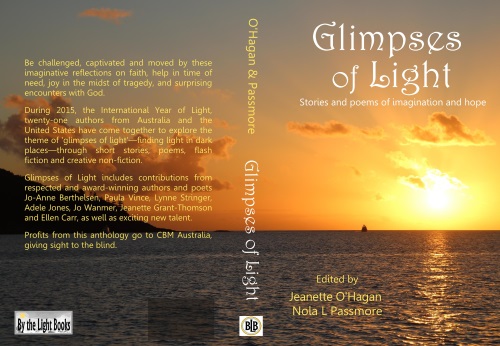 Like most years, 2015 has been a year of contrasts with its fair share of victories, challenges and tragedies. And while it hasn’t received much fanfare – it has also been dubbed the International Year of Light.

Sometime last year, I spoke to Nola Passmore about the concept of producing an anthology to celebrate the Year of Light with profits going a charity like CBM Australia (formerly Christian Blind Mission). At first we put it in the ‘too hard basket’, but the idea just wouldn’t go away. So I was excited when Nola agreed to partner with me in conjunction with Christian Writers Downunder to produce the anthology.

At the beginning of the year (16 January) we invited contributions for the Glimpses of Light anthology to Christian Writers Downunder members. We were thrilled at the response. We have also appreciated our support team, including our back-up judges, editors and proof-readers – Jo-Anne Berthelsen, Lynne Stringer, Christina Aitken and Paula Vince. We’d also like to thank Helene Young for allowing us to use her gorgeous photo for the cover.

While we didn’t accept every submission, we were pleased with the creativity and quality of the entries and delighted that our contributors were prepared to work with us in two rounds of editing plus proofing.

The anthology includes short stories, poems, flash fiction and creative non-fiction on the theme of glimpses of light (light in dark places). I was delighted with the number of speculative fiction entries, Nola was relieved that not all the short stories were as long as many of the fantasy pieces and enjoyed the poetry and creative non-fiction (though she just may be convert to spec fic).

Glimpses of Light is in the process of being typeset and with one final round of proofing, should be available as a print book and e-book on (or before) the 17th December.

Congratulations to all our contributors and a big thank you from Nola and myself to everyone who has worked towards making the anthology a reality. I can’t wait to hold Glimpses of Light in my hands and once again enjoy the stories and poems of inspiration and hope it contains.