The following was written years ago and stored as a reminder to persevere.
Ministry in its various forms can be infected with a weariness that makes the ‘Haran’ of Abraham's day desirable. Do you sometimes feel like I do about writing? There are so many out there competing for readers and modern technology produces more and more wordsmiths. What then can motivate us to break out of ‘Haran’ hit the keys again and complete the task? Simply the love of telling about God’s grace to the few or the many who may read our words! 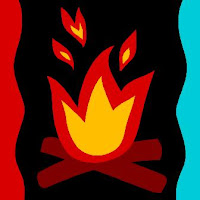 I was day-dreaming as I gazed into the camp fire. I imagined Abraham being tempted to settle down at Haran and give the Promised Land a miss.

Perhaps he said,“I hope you understand God. ‘Haran’ is such a go ahead place. It offers trade and commercial opportunities and seems to be a great spot to raise a family. We could put aside the tent, sell the camels and settle down.

"I know it isn’t the land you promised. It may not have the ‘milk and honey’ factors but it is beautiful in its own way. Anyway, its half way to where you wanted us to be! My wife and I could set up a half-way house, be your information centre for other travellers.

"Why am I intent on storing the tent?

"To be honest I’m weary. Not being in control of my affairs, wrestling with doubts and putting up with ‘knowing’ looks has worn me down. No, you haven’t broken your word b-u-t the strain of expecting it to happen has got to me. Lord I’m getting on in years and this faith thing doesn’t get any easier. I fear that in my old age I’d be redundant to your plans. What would I have as back up then?

"What’s that? What would I like inscribed on my tombstone?

"Never thought about it! What would you write at this moment? Almost!"

The barking of a dog shattered my day-dreaming at that point.
Lord, did Abraham ever feel that way? I often wonder about things like that as I wrestle with persevering towards securing your promises. I don’t want to rot in ‘Haran’ no matter how comfortable it seems. Keep calling me to walk the way you’re pointing. You and you alone remain my goal, my joy and hope in this journey of faith.

I’m so thankful that you travel the way with me, even if you seem to be the silent superintendent. Amen. 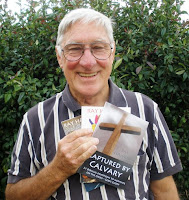 Most of us will die un-famous but we can hold fast to 1 Corinthians 15:58 ‘Always give yourselves fully to the work of the Lord, because you know that your labour in the Lord is not in vain.’

I’m also comforted by the fact that the written word lingers long after my computer is exchanged for a ‘harp.’ May my tombstone have on it ‘Escapee from Haran!’

Retired from the Chuches of Christ ministry after 40 years, Ray, with his wife Mary, moved to Beauty Point, Tasmania. One of their three children, Craig, had settled there with Rachelle. Now Ray and Mary are grand-parents to six children.

A small Christian Fellowship has commenced at Beauty Point under Ray's leadership. Since being there he has had three devotional meditations published by EBP (Rochelle Manners) the latest out this month 'Captured by Calvary.'

Ray was encouraged to write by Mary who is a multi-published author. He had previously seen some of his devotionals used by the Upper Room magazine and also some poems and prose in Debra White-Smith's books about husbands and wives.

In his leisure time Ray enjoys spoiling his grand-children, helping at Craig/Rachelle's Sea Horse World business and being the hero in Mary's books.

These thoughts were bought to you by Ray Hawkins at 07:00