CREATIVITY IN THE IMAGE OF THE CREATOR 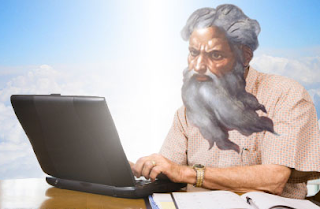 Where does a writer’s urge to create come from? While many answers are possible, I can’t help but wonder whether one factor is that we have been created in God’s image—and God is the ultimate creator.1

Most of us in this group seem to be fiction writers, and we assume that fiction requires more creativity than non-fiction. Having tried my hand at both, I’d say this is true. However, writing non-fiction still requires creativity: as a minimum, it involves communicating information in a new way (if it didn’t, it would be plagiarism). Decisions must still be made about structure, grammar, etc. Ergo, all writing is creative: it involves bringing into being something that didn’t exist previously.

Obviously there’s more ways for people to create than through writing. However, with a bit of dodgy exposition, we can make a tongue-in-cheek case that writers are closest to God in this regard because of their chosen medium. Everything God created was created through the Word (John 1:1–3); everything we create is created through the word. Of course, the Biblical concept of logos (‘word’) is not to be taken too literally, so this parallel is little more than a play on words (so to speak).

While considering the parallel between God’s creativity and ours, we might bravely ponder whether God’s creation is fiction or non-fiction. For centuries, philosophers have been arguing about whether everything is actually real; ie, true and therefore non-fiction. I feel that the creation is real in the sense that (in my opinion) it exists—yet I also feel that it is artificial in the sense that God’s realm, to which we aspire in eternal life, will allow us to see things as they really are (cf. 1 Corinthians 13:12).

In addition to having the desire and ability to create, God derives satisfaction from the results of his creative efforts; eg, ‘And God saw that it was good.’ (Genesis 1:10). This, too, is reflected in the writers’ experience. I’m reminded of a quote from Gloria Steinem: ‘I do not like to write—I like to have written.’. On a bad day, I know what she means! (Presumably God didn’t have any bad days and enjoyed the process as much as the product.)

Obviously, Christians are not the only ones who desire to write, or to create in general. However, I don’t think this observation invalidates my hypothesis, since all people are created in God’s image. Hopefully, as Christians, we are more in tune with that image and more desirous of aspiring to it.

So, next time you put finger to keyboard to create, perhaps you could derive some satisfaction from the thought that you’re reflecting God’s image.

1. I’m not meaning to imply anything about the processes that God may, or may not, have used to effect his acts of creation. I’m only assuming that, as Christians, we believe God to be the ultimate cause.

These thoughts were bought to you by Peter McLennan at 08:45