Behind the Scenes: Count Your Blessings by Hazel Barker

Today we go 'behind the scenes' as Jeanette (Jenny) O'Hagan interviews Hazel Barker. 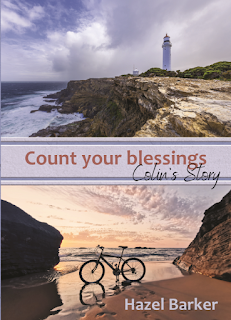 Jenny: Congratulations, Hazel, on the release last year of Count Your Blessings: Colin’s Story. This is now your fourth book published book, plus a number of short stories. Can you tell us what is this book about?

Hazel: ‘Count Your Blessings. Colin’s Story’ is about a young Aussie battler who struggles to fulfill his dreams. His mother has mood swings, and his school mates bully him. The Depression Years cast a shadow on his future, and his studies are cut short, but his plucky spirit carries him through one crisis after another and the unexpected turns up.

Jenny: It sounds like an inspiring tale. One of your books is called Chocolate Soldier. It’s an intriguing title. What does it mean and how does it relate to your book?

Hazel: Clarence Dover, the protagonist of ‘Chocolate Soldier. The Story of a Conchie,’ was a conscientious objector who trained as an Ambulance worker at Manor Farm, which was only a stone’s throw from Bourneville Village and the Cadbury Chocolate Factory. The estate was owned by the Cadbury family who were anti-war and provided training for conscientious objectors. The men came to be known as Dame Cadbury’s chocolate soldiers.

After training, Clarence was sent to London as an ambulance driver during the Blitz. When the blitz was over, he volunteered to work in China alongside members of the Cadbury family. 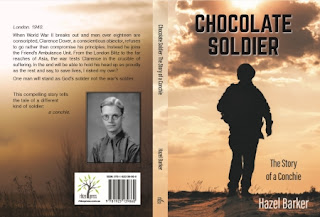 Jenny: Ah, now it make sense. In some ways, I think conscientious objectors needed twice the courage as non-combatants in a warzone. In Heaven Tempers the Wind you relate events of your childhood during World War Two in Burma (now Myanmar).  How did your early years shape you into the person you are today? Have you ever returned to the land of your birth? Would you like to?

Hazel: During my early years, we were under Japanese occupation and suffered from sickness and starvation. I lost my elder sister, June, from the plague, nearly lost my young sister from small-pox, and my two older brothers from the bombing.

One night, an incendiary bomb landed on our house between my brothers’ beds. Fortunately, they had taken refuge in our trench and suffered no harm. My young sister, who had smallpox at the time, could not shelter there, but my mother had taken refuge with her, beneath a table. In her delirium, while bombs were falling overhead, my little sister sang the hymn, ‘Father we thank Thee for the night.’ She recovered and is still alive now. This incident, in particular, has had a profound effect on my life as I have learned to always trust and hope in the Lord.

In reply to your second question, Jenny, I left Burma in 1967 as a stateless person with no passport and only a certificate of identity. I never wanted to return, but years later, when holidaying in Thailand with my husband, our tour guide told us that we could visit Tachilek markets on the other side of the border, if we bribed the Burmese guard with a US Five dollar note. We did so, crossed the bridge over the Salween River and entered Burma. That is the only time I set foot in Burma, but I have never visited my birthplace, Mandalay. The country has changed so much since I left, but I would love to show my husband the places I frequented as a child, and the towns we had fled to when the Japanese army invaded Burma in 1941. 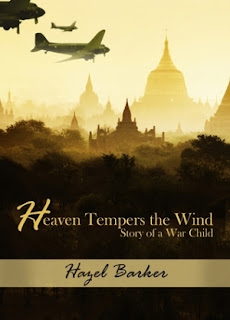 Jenny: I'm glad you managed to get a small visit to Burma. I enjoyed showing my husband around my birth town some years ago. And, wow, such a formative moment with danger at every side, yet God's faithfulness shinning through. I also glad you've taken time to write your story.

When did you start writing about your life and your family? What have been some of the biggest challenges and joys along the way.

Hazel: I commenced writing my story as soon as I retired from teaching. It was so difficult telling my story that I wrote it in the third person but feeling that a first-person account would have more appeal, I re-wrote the entire book in the first person. I shed many tears when re-living our sorrows and hardships, but my biggest challenge was not to hurt my family.

After storming heaven with my prayers, I felt I needed to keep writing. I hoped that others too, would more greatly understand the Lord’s mercy and never give up hope even in the direst circumstances.

The biggest joy when writing my memoirs was re-living those happy moments, and just holding my books when they first arrive from the publisher.

Jenny: Good on you for keeping on writing at the Lord's prompting through the difficulties. Holding one's book is a wonderful feeling. Any tips on how to approach writing a memoir or biography?

Hazel:   1. Read many memoirs and find out what appeals to you about them.

2. Write a timeline of your life and decide which events you wish to include in your memoir.

3. Think of a theme to link your story.

5. Ask clarification about incidents you may not quite recall. Ask your parents, your family or

anyone who may be able to jog your memory. 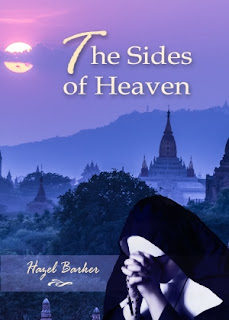 Jenny: Do you plan to write and publish any other books? What will they be about, and do you plan to publish them?

Hazel: Yes, Jenny. There are two more books I hope to write before I pass away.

1.      The last book of my memoirs, ‘Opera, Orchids and Oz.’ I’ll give my publisher, Armour Books, first preference for its publication, as they have already published books one and two of my memoirs.

2.      My final book will be ‘The Soprano,’ a novel based on a true story of an Australian opera singer. I will give first preference to Rhiza Press as they published my first novel, ‘Chocolate Soldier. The Story of a Conchie,’ which is still earning Public Lending Rights from libraries.

Thank you, Jenny, for giving me this opportunity to speak of my books, which I hope, will continue to result in more faith and hope in the Lord, as well as heaps of pleasure to my readers.

Jenny: I love that title 'Opera, Orchids and Oz'. All the best with your two projects and thank you for taking time to share your fascinating and inspiring story with us today. 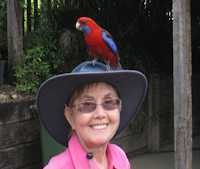 Hazel Barker migrated from Burma in 1967. She holds degrees in Arts (UWA), and Education (UNE), and excerpts from her books have been published in anthologies.

Hazel’s debut novel, Chocolate Soldier. The Story of a Conchie was published by Rhiza Books in 2016. Both her memoirs, Heaven Tempers the Wind. Story of a War Child (Armour Books, 2016) and The Sides of Heaven, (Armour Books, 2018), were finalists in the CALEB Competitions, 2017 and 2019, respectively.

Count Your Blessings. Colin’s Story was released by Armour Books in 2020.