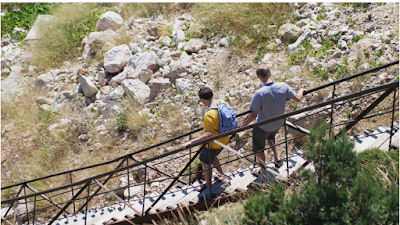 One day, Jesus was out with his disciples, accompanied by the ragtag bunch who followed him everywhere, when over the crest of a nearby hill (or maybe around the corner of a city street), two men came bustling up on an important mission.
‘When the men came to Jesus, they said, “John the Baptist sent us to you to ask, ‘Are you the one who is to come, or should we expect someone else?’”’ (Luke 7:20 NIV)
What!?  Hadn’t John’s mother told him, and retold, the story of Mary visiting her when they were both pregnant? Hadn’t they kept in touch as cousins over the years, especially on the annual pilgrimage to Jerusalem for Passover? So wouldn’t John know who Jesus was when he turned up at the Jordan? Hadn’t John seen the Holy Spirit descend on Jesus when he was baptised?
Why question Jesus’ identity now?
Well, Jesus was wandering around the countryside mixing with all sorts of nobodies and undesirables and deplorables, and doing nothing at all about raising an army to kick out the Romans and bust John out of Herod’s prison.
Considering John was on death row, fair enough that he was feeling a bit tetchy. Poor guy.
But here’s the thing. Can Christian writers learn anything from this story?
Well, first, that it is a story. A true story, included in Scripture for a reason. Along with all the other forms of writing in Scripture, an honoured place is held by stories. This validates our telling stories to share Christian truth, particularly stories of how God has worked in our lives.
Even fiction is included, unless you hold that the Good Samaritan and the Prodigal Son and his father and brother were real, historical people.
But what can we learn from this particular story?
Australian society around us is a lot more sceptical about Jesus than John ever was.
How does Jesus’ response to the men who came from John help us there?
Note first that Jesus does not enter into a religious argument with them. He lets them watch him at work, and at the end of the day he tells them to go back to John and tell him what they have seen. ‘”The blind receive sight, the lame walk, those who have leprosy are cleansed, the deaf hear, the dead are raised, and the good news is proclaimed to the poor.”’ (Luke 7.22 NIV)
I’d suggest from this, that our first response to a sceptical world is to display a surprisingly different life, where Kingdom values are lived out. Especially values of kindness and care and concern for the poor. To actually mix with society’s marginalised.
A response where we don’t leap to defend ourselves when challenged.
Where we’re not easily offended. Where we don’t turn on others who hurt us or doubt us.
A response of compassion for the doubters, not superiority because we’ve ‘got it.’
Second, Jesus wasn’t thrown off-course. He didn’t start doing whatever John and others must have expected a Messiah to do. He continued doing exactly what the Father was telling him to do.
Are we doing what the Father has called us to do? Or something else? In our writing or elsewhere, do we take time to stop and check we’re on course?
Are we keeping our ears open to the Father, while we live out the Kingdom in a world of sceptics? If so, there is a possibility a watching world might see a little of God at work behind the scenes, through the life we live and the words we write.