Nola Passmore's debut novel Scattered was the fiction runner up in the 2017 FaithWriters Page Turner competition. She has also signed a contract for the novel with Breath of Fresh Air Press. You can read more about it at the following link 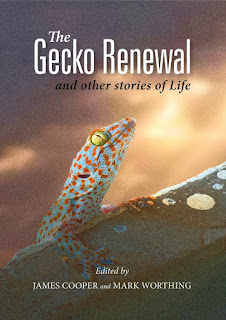 Jeanette's short anecdote, Amazing Gracie, is included in the Stories of Life anthology, The Gecko Renewal.  Jeanette says, 'My story is the account of how our car broke down in New Zealand on a cold evening and God came to our rescue.'

The Gecko Renewal is an anthology of true short stories about how God intervenes in our lives. It consists of the long list selected from entries.

Jeanette Grant-Thomson has been an author most of her life and currently lives in the Moreton area.

Christine Dillon's Grace in Strange Disguise was released in October 2017 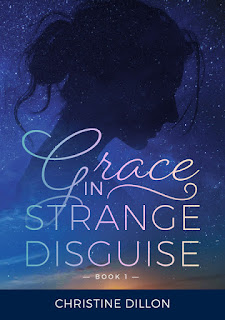 Physiotherapist Esther Macdonald is living the Australian dream, and it doesn’t surprise
her.

After all, her father has always said, “Follow Jesus and be blessed.” But at twenty-eight, her world shatters. Everyone assures her God will come through for her, but what happens when he doesn’t? Has she offended God? Is her faith too small? So many conflicting explanations.

Will finding the truth cost her the people closest to her heart?

Grace in Strange Disguise won a Gold star for cover design from Joel Friedlander Coverdesigner competition (October 2017)  You can find how to get a copy from here.

Christine Dillon is an Australia author working in Taiwan as a missionary since 1999. She writes non-fiction (traditionally and indie published) and this is her first novel. 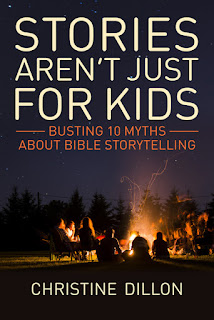 In a world increasingly anti-Christian, how can you communicate in a way that slides under listener's defences? How can you leave them hungry for more?


Stories are God-designed way to impact hearts. But many Christians reject stories as just for kids. Christine Dillon has trained thousands of people in storytelling. 10 myths come up over and over again, and they block Christians from using this life-changing ministry tool.
MYTH 1: Adults won’t listen to stories
MYTH 2: Stories are only for non-literate cultures
MYTH 3: Men won’t listen to stories ...
MYTH 6: Storytelling won’t grow mature disciples
MYTH 8: Storytelling will lead to heresy ...

Using stories from around the world Dillon tackles each myth and challenges you to master this tool.

Christine Dillon is a Bible storyteller and trainer who works in Asia and Australia. Her book, Telling the Gospel Through Story: Evangelism that keeps hearers hungry for more (IVP, 2012) has inspired many to start telling the greatest story of them all.


Mixed Blessings: As Time By Go By 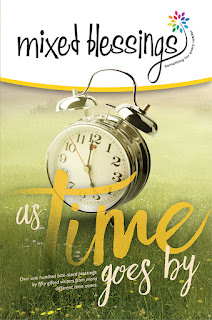 Mixed Blessings—As Time Goes By is filled to the brim with fun, encouragement, food for thought, and inspiration. You may find yourself chuckling one moment and shedding a tear the next. In fact, it is the perfect mix of blessings for your daily reading enjoyment.

Available on Amazon  or at Breath of Fresh Air Press. 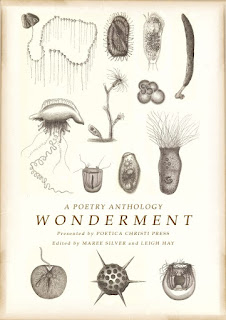 WONDERMENT – a poetry anthology – Grand themes do have their place in literary works, but good poems are more often the result of carefully observed ‘spots of time’, to use Wordsworth’s term. Being attentive to these moments in our lives, moments when we see the wonder of God’s creation in the world around us, is an aptitude that gifted poets develop. They observe what many often miss, divine glory revealed in the small things of life. This collection contains many such poems.

Poetica Christi is running the next competition - on the theme of Interludes - deadline 30 April 2018.  You can download an application form here.

May-Kuan Lim - Fish in the Well

May-Kuan Lim with Hen Chin Lim and Penne Lim, have relaunched Fish in the Well: A memoir of faith and aspiration. 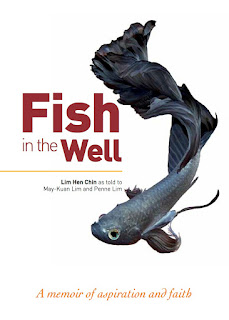 In his memoirs, Lim Hen Chin, born in 1940, recalls his early years around Ipoh and his search for a way out of poverty. His journey is described against enormous socio-political changes: Malayan independence, war against Communism and birth pains of a new nation, Malaysia. It tells of a young man's determination and his sister's unwavering belief in him. In later years, success brings its own troubles. Resigned to the life that fate has dealt him, peace remains illusive until he makes a decision that changes his life.

May-Kuan is the administrator of the 2018 Stories of Life faith-writing competition and a freelance writer, who blogs on migration and crossing cultures as The Curious Scribbler.


Jeanette O'Hagan's Ruhanna's Flight and Other Stories (By the Light Books) is currently available for pre-order on Amazon for 6 March release. 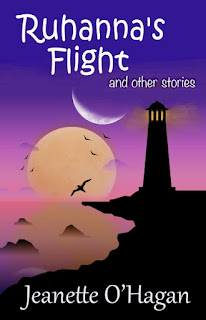 Tales of wonder, romance, adventure - dip into the world of Nardva with this collection of stories.

* * *Ruhanna's Flight - Ruhanna’s father is coming for a rare visit from the capital. When everything goes terribly wrong, she discovers a mysterious gift that could save her --- if it doesn’t kill her first.

* * *Heart of the Mountain – When shapeshifter Zadeki slams into the mountain side, he finds himself trapped in a strange underground realm. Can he escape or is he there for another reason?

* * *The Herbalist's Daughter - Anna has her heart set on an burly guard at the palace, but the antics of the young Prince could jeopardise both of their futures.

* * * Rendezvous at Alexgaia - In her last mission, Space operative Dana secured the Infinity Cube at the cost her partner's life or at least his humanity. Will Neon's sacrifice be for nothing or will Dana be able to retrieve the key to the mysterious cube's use?

Ruhanna's Flight and other stories includes Nardva tales previously published in a range of anthologies plus some new stories. While mostly set in the southern hemisphere of Nardva, the adventures range across the ages - from early days on the Lonely Isles to the space age of Nardva.

Jeanette spun tales in the world of Nardva as a child. She enjoys writing fantasy & poetry. Her stories span continents, time & cultures in another world.

Release date; 6 March 2018
Publisher By the Light Books.
Preorder now for low price of 99cUSD at Amazon US or Amazon AU 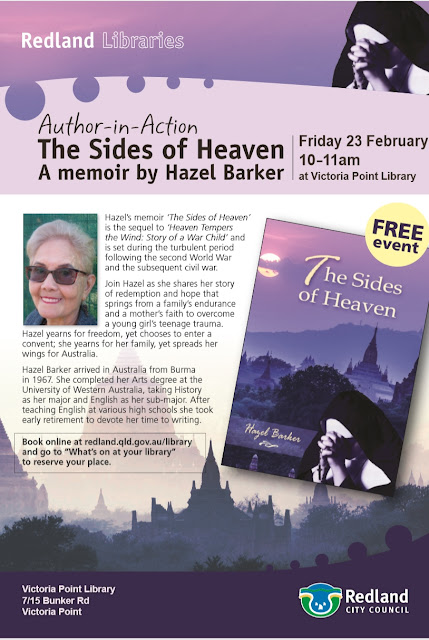 Congratulations to Simon Kennedy. SBS is presenting a Four-Part Drama, Safe Harbour developed from Based on an original concept by Simon Kennedy and Phil Enchelmaier. https://www.sbs.com.au/programs/safe-harbour

Old secrets come to light, relationships are shattered and lives are put in danger. One question hangs over it all – who cut the rope?

Friends on a sailing holiday discover a struggling fishing boat overloaded with asylum seekers. Deciding to tow the refugees, they wake the next morning and find the fishing boat gone. Who cut the rope between the two boats?

Did they know it would end with tragic consequences?

Safe Harbour count premieres on SBS, March 7th at 8.30 pm. You and watch the trailer here.

David Bennett has a new release, his latest missionary biography -  Hudson Taylor and China
Published by Rhiza Press in March 2017 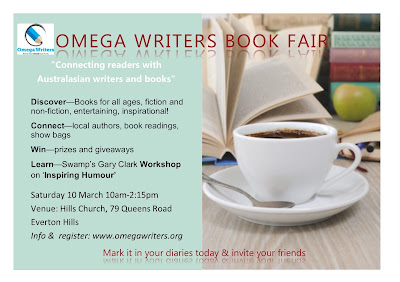 Several CWD authors, publishers and editors will be there - including Rochelle Manners, Deb Porter, David Bennett, Lynne Stringer, Anne Hamilton, Victoria Carnell, Nola & Tim Passmore, Adele Jones, Hazel Barker, Jeanette O'Hagan, Jan Morris, Ruth Bonetti, Raelene Purtill. If you are in or around Brisbane - this will be a great opportunity to meet up with other Christian writers, do a fantastic workshop with Gary Clark (creator of Swamp) and/or have a table to display your books.

To find out more look at the Omega Writers Website - or the FB event page. 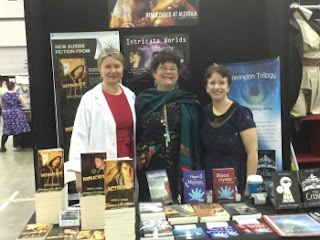 Lynne Stringer, Adele Jones and Jeanette O'Hagan will have a stand at Gold Coast Supernova from Friday 27 - Sunday 29 April. We'd love you to drop and say hello and talk to us about our books :)