Question 1: Tells us three things about who you are and where you come from.

My name is Lynne Stringer and I was born in London but am now an Australian citizen. We moved to Australia in 1973. My mother is Australian and my father English. They met in the bookshop where they both worked while she was on a working holiday. Isn’t that romantic?😊

Question 2: Tell us about your writing.  What do you write and why?

I write because I have stories knocking on the inside of my head, demanding release. They have to come out. I write mainly for the young adult market and more for the secular market than the Christian one, although my stories are, of course, influenced by my Christian faith.

My books are written mainly for young adults and I find that many are drawn especially to my debut novel, The Heir (Verindon #1). I’ve also found that people of all ages, even ones who don't like science fiction, usually love it once they've read it.

I think the most exciting encounter I've had with someone who loved my books was the day I was walking my son to school when I was wearing a t-shirt dedicated to The Heir. I knew that the school’s book club had read my book and one of the high school students came up to me and said, ‘Are you Lynne Stringer, the author of The Heir? I loved it so much!’ It was very exciting!

I’d love my books to be made into movies so if anyone with industry clout read them I would be happy.

Because I’m also a professional editor, I find there are times of the year where I become exhausted from reading and writing and need to take a break. That might sound strange but that’s the way it is. I usually find it kicks back in again after I’ve had a holiday but sometimes writing can feel like work.

However, as I once worked as a journalist, I’ve learnt how to write in spite of that. For example, I know that if I really need to write and can’t think of what to say I just write complete and utter rubbish, knowing that, sooner or later, I’ll find my way and then I can go and fix up the rough parts later. It’s hard but it’s a great way to break through something like writer’s block.

I don’t really have one. I usually find I don’t learn well from what I read in instructional books. I'm more of a 'hands on' person. 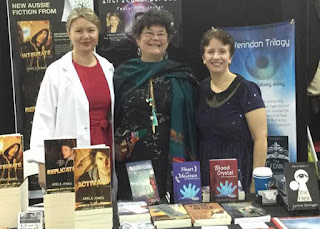 Can I say two? Jeanette O’Hagan and Adele Jones. Both are fantastic writers and they’ve become good friends. We go to events together and complement each other well in what we write.


Question 7: What are your writing goals for 2018? How will you achieve them?

I am hoping that my latest manuscript will be published and perhaps another as well. I’ll be trying one with a new publisher so that will be an adventure. I have also just started writing a new manuscript. I hope it will be my best work yet.

Everything I write is written with the idea that the God I worship has a high standard. However, I’m also writing about people who will never meet that standard, so I walk the line between honouring God and writing realistic scenarios in speculative fiction settings. It’s an interesting mix.

Lynne Stringer has been passionate about writing all her life, beginning with short stories in her primary school days. She began writing professionally as a journalist and was the editor of a small newspaper (later magazine) for seven years, before turning her hand to screenplay writing and novels. She now works as a professional editor and proofreader.

Lynne is the author of the Verindon trilogy, a young adult science fiction romance series released in 2013. The Heir was the first in the trilogy, followed by The Crown and The Reign. Her latest novel, released in October 2016, is Once Confronted, a contemporary drama. Visit Lynne's website for more information.

These thoughts were bought to you by Lynne Stringer at 05:00