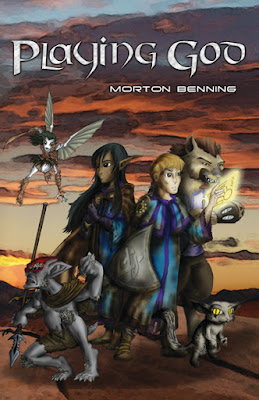 Last week I was asked to review the newly released publication, Playing God, by Morton Benning. It was a fun and thought provoking read so I decided to post the review here.

Playing God follows the story of Keenley Turnshoe, an apprentice cleric in the medieval fantasy world of Utopia. One day Keenley attempts to use the prayer glass in the clerical school’s library to ask the Great God Avatar a question. But something goes wrong. The God doesn’t respond as Keenley expects and the prayer glass goes blank. Keenley is terrified he’s broken the Great God.
What Keenley doesn’t know is that his world is virtual, created to be the play-thing of Jeff Masters, a spoilt rich-kid. Through the Deus Interface, Jeff acts as the God of the world, the interface a form of ‘answering machine’ for the prayer requests of the people.
The problem is that the Deus Interface has decided that it is the Great God Avatar and perceives Jeff to be a threat. It strands the self-absorbed Jeff in his own virtual world where he is forced, to his disgust, to live by the rules of the world. Jeff joins forces with Keenley and his friends in a quest to return to his virtual throne room and fix the problem. Meanwhile Paley, the creator and coder of the virtual world must race against time to rescue Jeff. Failure has real-world consequences. If the Deus Interface cannot be defeated, not only will Keenley and others of the world be ‘killed’, Jeff and Paley may die.
Playing God is an entertaining tale that bridges the genres of science fiction and fantasy. I especially appreciated Benning’s humour which is, at times Pratchett-esque. In describing Keenley’s friend, Miyako, Benning writes: ‘She was the only one of her race many people in this part of the world had ever seen but she was so unassuming her teachers would often mark her absent by mistake.’ Later in the story, Jeff’s attempts to assert his Great God-ness are ironically contrasted with his impotence. ‘ “I’m God. This is my world. I’m in charge and I decide when it stops.” After a moment Jeff looked at the others and said, “So what’s the plan?”’
The story draws to a tension-filled conclusion where the two realities collide and a temporal twist raises the stakes even further.
One of the benefits of writing in different worlds is that an author can explore issues and ideas out of their normal context. In Playing God, Benning considers the question ‘why is it that people want to be God, or be their own God, yet are really bad at being God?’ This subject has been dealt with frequently in pop culture, such as the iconic 2003 movie, Bruce Almighty. In this film, Jim Carey plays a down-on-his-luck news reporter who tells God he’s not doing his job properly. God, in response, gives him the job, with disastrous results. While Playing God is set in a completely different genre than Bruce Almighty, a similar truth is conveyed.  The self-centred Jeff’s extreme lack of God-like character has, at times, dire consequences for the people who live within his created world.
Playing God is an enjoyable read and I would recommend it for gamers, science fiction/fantasy aficionados, and anyone else willing to take the leap into Benning’s thought-provoking and entertaining virtual world.

Playing God can be ordered from all good booksellers or directly from the publisher, Stone Table Books.

Sue Jeffrey was born in Scotland but moved to Brisbane, Australia with her family when she was just a wee lass. After a childhood spent reading, drawing and accumulating stray animals, Sue studied veterinary science and later moved to Adelaide where she worked as both a vet and a pastor. After a sojourn of several years in the Australian Capital Territory, Sue returned to Adelaide with two dogs, a very nice husband, and a deep desire to write. Sue has a MA in creative writing and her short stories and poems have appeared in several anthologies including Tales of the Upper Room, Something in the Blood: Vampire Stories With a Christian Bite, Glimpses of Light and A Chicken Can Make a Difference. Sue won the 'Short' category in the inaugural Tabor Adelaide/ Life FM 'Stories of Life' award and her e-book, 'Ruthless The Killer: A Short Story,' is available from Amazon.com. Sue also paints animal portraits