I recently attended the annual Toowoomba Omega Writers Retreat. I had planned on spending time   writing,  but instead God had a surprise in store for me.  For years I had wanted to publish my own devotion book.  I had written a number of devotions, but no where near the 365 that I thought I needed for a year-long book.   I had ben feeling overwhelmed by the size of my vision, to the extent that I was almost immobilized. Oh I wrote a devotion now and then, but felt lost because it all seemed too big and too difficult. I was quite unmotivated and daunted by the size of the task.  So, I attended the retreat with the plan of writing a couple of devotions.  A friend had suggested that I book an appointment with the guest speaker to chat about publishing.  I laughed. I thought she was joking.  I was no where near the publishing stage, and wouldn’t be for years, the rate I was going. Why would I want to speak to a publisher?  By the time my manuscript was ready, too many things would have changed.   Well, as He often does, God had other ideas.

During a break, the guest speaker stopped for a chat and enquired about what I  was presently writing.  I mentioned my desire and struggle to publish my own 365 day devotional book.  Her answer was along the lines of “It won’t sell as there is no market for devotional books which are that long. Life is busy and most people won’t commit to something for that length of time.  As a matter of fact, people would be much more likely to buy a book of 30 devotions”.  Really?  Yes, really.   Surprise! My goal of writing my own book was suddenly attainable.   I made an appointment to talk more with the speaker. (My friend was pleased, as she wasn’t joking when she suggested  I do  this).  In the course of the half hour I spent with her, we came up with ideas for a number of books, including prospective release dates and ideas for a cover.  I was motivated and excited.  My impossible dream now seemed like a possibility and was definitely within my reach.

Why am I telling you this? To encourage you in a number of areas.
1. Position yourself to learn. Make the most of available opportunities to glean from those who are more knowledgeable and experienced. Attend retreats and conferences.  Help is available, especially with todays technology.
2. Be teachable, always ready and eager to learn. We are never too old to learn new things.
3. Trust God. He is faithful. He believes in us more than we believe in ourselves. He has a plan and a purpose for our writing. If He has given us dreams and desires, He will do His part to see them come to fruition.  We have to be willing to do our part by trusting Him to guide us as we write what He lays on our hearts.
4. Any progress is just that, progress.  It may be a slow process, but keep moving forward in your writing journey.  Don’t allow yourself to stagnate. Even taking baby steps is better than standing still.
5. Use the talent God has given you.  The more we invest what He has given us, the more our talent will grow and develop, and be used by Him. And isn’t that why we write? To give Him the  glory and honour due to Him, and to touch the hearts and lives of others on His behalf?

I have to remind myself of these points, often. My writing journey has been a slow process but I am greatly inspired and encouraged when God throws in a surprise along the way. 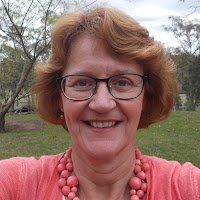 Janelle Moore lives in Toowoomba, Queensland with her husband and two teenagers. She has had various articles and  devotions published, and as mentioned above,  has long desired to publish her own book.  She is forever indebted to her Quirky Quills writing group for their nagging (oops, encouragement), and to Deb Porter (Breath of Fresh Air Press) for giving her hope that publishing her own devotional book is actually achievable.

These thoughts were bought to you by Janelle Moore at 05:00