Telling the Truth, the Whole Truth and Nothing but the Truth

Telling the Truth, the Whole Truth and Nothing but the Truth

I was recently doing some grading work with my headphones on and listening to a 1980s playlist and the song “We are the World” came on. When this song was first released it was a thrill for me that my pop idols were doing something to aid in the horrific struggles to end world hunger. However, as I listened to it again I realised there were some issues with this stirring song with its overt humanistic lyrics. One particularly. Remember when Willie Nelson gets his moment at the microphone and with his signature warble he says:  “As God has shown us…  by turning stone to bread…”
As God has shown us by turning Stone to Bread….. hang on NO he didn’t… what is he saying?
I couldn’t believe it.  Had Willie Nelson just said that God had at one time “turned stone to bread”?  Had I really heard that?  Who’d written this lyric — and why had Willie sung it?  It was obvious that they mistakenly thought Jesus had at some point in his ministry performed this miracle…   But even me as a non-Grammy-winning high schooler knew (when the song was originally released), Jesus didn’t turn stone to bread — he refused to turn stone to bread.  That’s an important difference.

Sometimes we can write things .......and they kind of look good, sound good, but in fact they, sincerely, are wrong.

Sometimes things sound right but when we revisit it they are 'sinisterly' wrong. Sometimes we can write things and they sort of just roll off our pen nib, pencil, quill or keyboard, and they kind of look good, sound good, but in fact they…. sincerely, are wrong, confusing, or convey a message we didn't intend. For example we might write something like  …….
“Luke said that he had gone to lay on the couch, so he lied.”
This is a tricky phrase because the meanings of those words change the understanding significantly.
To lie (intransitive: lies, lay, has lain) means to recline; to lay (transitive: lays, laid, has laid) means to set down; to lie (intransitive: lies, lied, has lied) means to fib. Correct: "He lies on the couch all day." / "He lays a book upon the table." / "He lies about what he does."

There are so many words that we can misuse in English. Some of the examples are homonyms or pairs of similarly spelled words that are often confused. Do a google search and you quickly find many lists that convey how words are frequently used in ways that major English dictionaries do not condone in any definition. Some words are used in ways that are deprecated by some usage writers, but are condoned by some dictionaries. Some words are not seen as incorrect in particular contexts and may be correct in a particular area once they have gained widespread acceptance.

Using the word “Easter” to encapsulate the meaning and significance of the weekend just ahead.... has become problematic.

For our family, it is a bit like using the word “Easter” to encapsulate the meaning and significance of the weekend just ahead. As a family, we take special cognition in the reality of what Jesus death and resurrection means. This means we solemnly take time to reflect and remember His sacrificial death and also celebrate the fact that He is alive. We are thankful for the price He paid for our salvation. But, to call it Easter in my mind has become problematic. As an inquiring believer, I simply questioned where the old naming came from, and of course I discovered that the word origin and meaning of the word “Easter” and the ancient rites attached to it were far less honouring of our Saviour and what He represents for what I am comfortable with. Sure, I recognise some redeeming of the word and even actions attended to that aimed at communicating elements of the Christ story through cultural iconography, even so, it all looks very syncretic. So, what to call it? I want this name calling of a pivotal time in our devotional calendar to encapsulate the Truth and Love of Jesus, more than bunnies, and eggs, chocolate and partying.

I want my naming of things and words that I use around this theme to be God honouring, glorifying of Jesus and at the same time culturally accessible and relevant. I want my writing to remain the same. I don’t have an answer to renaming Easter (except to reframe it simply as “Resurrection Weekend” or less simply “The Weekend We Remember Jesus Death and Resurrection”). But I do have an answer to making sure I tell Truth’s and be Truth telling. I will acknowledge my own propensity to mistakes. Miss-spellings, incorrect grammar, learning that’s on a continual growth curve. I will aim to stay authentic to being on a journey, while having others help me on this journey by their caring, equipping and helping me with the needful adjustments. I will consciously and conscientiously aim at being more a reflection of Christ than the influences the world tries to colour me with.

Anyway, I am listening to that old song again and thinking “didn’t someone actually suggest turning stone to bread?"  Whose idea was that? (Cue 80’s-era power cord with appropriate reverb): Satan’s?? That’s right, it was the devil’s idea.  Remember the scene from Scripture where Jesus is tempted in the wilderness. He is hungry, having fasted for forty days, and the devil suggests that he use his miraculous powers to turn “these stones into bread.”  And Jesus refuses, saying: “Man does not live by bread alone, but by every word that proceeds from the mouth of God.”  Lionel and Michael and Cyndi and Willie and everyone else in the USA for Africa studio seems to have missed this.  And for a while I did too. It wasn’t until I stopped, looked, listened and asked some questions of this bit of lyric that I got a bit of the real story behind this song.

Perhaps it is worth doing this again as we consider this “Easter” weekend ….. or whatever you want to call it. Let’s remember again the Truth in this time, and get beyond how our culture seems to have literally bought in on a marketable idea with all its product, images, icons and word usage. Let’s somehow get back to the very real message and cause that Jesus laid His life down for….. and that is no lie.

“To this you were called, because Christ suffered for you, leaving you an example, that you should follow in his steps. “He committed no sin, and no deceit was found in his mouth.” When they hurled their insults at him, he did not retaliate; when he suffered, he made no threats. Instead, he entrusted himself to him who judges justly. “He himself bore our sins” in his body on the cross, so that we might die to sins and live for righteousness; “by his wounds you have been healed.”  For “you were like sheep going astray,” but now you have returned to the Shepherd and Overseer of your souls.”

Sorry I couldn’t help finishing with this (somewhat tacky) Truth filled Parody of the song mentioned...

“We are in the world, we are His children
He is the one who makes a brighter day
By the life He’s giving
There's a choice He’s making
He’s saving all our lives
It's true He’ll make a better day
for you and me


So, may we all must accept His helping hand"

May the TRUTH and LOVE of Jesus' life, sacrificial death,  and resurrection be a power in your reality for you every day. God bless. 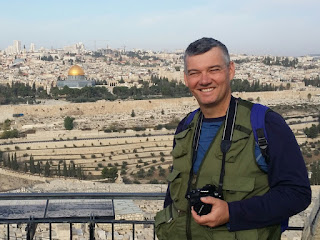 These thoughts were bought to you by Shane Brigg at 11:47