'One Day' by Sue Jeffrey

Late last year I decided to start blogging. I love writing and I like to express my opinion on things that matter. A blog seemed to be a natural outlet for those opinions. Alas, nothing happened. I'd think about setting it up then all too eagerly relegate the idea to my ‘one day’ pile. There were good reasons for this. Unexpected health issues, other writing projects, general busyness of life and church, along with paid work, are all factors that fuelled my exceptional gift for procrastination. [My honorary PhD in this subject will be coming in in the mail soon, I’m sure…]

I might never have started but for Nola calling for writers for this blog. I reasoned that it was a great opportunity to begin. Even if it were just a one-time-only trek up the snow-capped mountain of bloggerdom, it would be a start. And so here I am. Hi, everyone!

I know I’m not alone in succumbing to the ‘one day’ phenomenon. It’s rife in our world where there are so many demands on our time and peace of mind. As writers we are especially at risk. This thing we do has no immediate productive value as our society judges it, unless we have a contract and a deadline. Even then there are those who question us.

‘Isn’t writing something you do when you retire?’ one woman said, when I enrolled at Tabor Adelaide to do my Masters (creative writing). I laugh about it now, but sometimes I still hear the whisper in my soul that creativity isn’t important. Not really. Not now. Maybe one day…

But it is important. For most of us Christian Writers Downunder, writing is a key part of our heart and our call. Our Father, the creator of all things, whispers into the deepest places of our being, saying, ‘Come, create with me.’  We obey as best we can but sometimes it’s still tempting to say, ‘Yes - but one day.’

In Ephesians 5:16 Paul tells us to make the most of every opportunity, as the days are evil. How we do that depends on our call. But we need to do it now – not one day – because one day might never come.

Adelaide is still reeling from the news that a prominent sporting personality was murdered last Friday – by his son. It’s unbelievable. Phil Walsh was senior coach of the AFL team the Adelaide Crows and in that role was a well-liked mentor to many young footballers. He had been a strong influence at several clubs before this. I remember reading an article about Phil before the current footy season. In 2012 he had an accident while on holiday in Peru. He was hit by a mini-bus and his injuries left him in hospital for weeks. He realised that life was precious – and brief – and he needed to take risks and make the most of his potential. When he returned to Australia he listed all the things he wanted to accomplish. Until that time he’d been content to be an assistant coach but in late 2014 he agreed to be the senior coach at the Crows. He died a few months later.

The whole thing is tragic and many in their grief will ask ‘why?’ There is no answer other than ‘the days in which we live are evil’.

I don’t know where Phil’s heart was/is with God – only the Lord knows that – but I do believe that when he died he was fully engaged in what he perceived was his life purpose.

Our God is gracious as he calls us forward in our craft. He forgives our procrastinations. He whispers to us as we feel his tug to co-create. ‘Begin afresh, my child. Forget about yesterday, don’t worry about ‘one day’, today is here. It is precious; so are you!’

What has God put on your heart to accomplish? What will you do today? 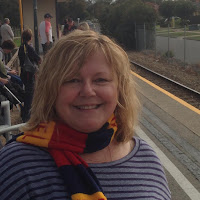 Sue Jeffrey was born in Scotland but moved to Brisbane, Australia with her family when she was just a wee lass. After a childhood spent reading, drawing and accumulating stray animals, Sue studied veterinary science and later moved to Adelaide where she worked as both a vet and a pastor. After a sojourn of several years in the Australian Capital Territory, Sue returned to Adelaide with two dogs, a very nice husband, and a deep desire to write. Sue recently completed a MA in creative writing at Tabor, Adelaide and now lives in Grange, South Australia, with her husband, two ancient doglets, a fat, tortoiseshell cat and a recently rescued cockatiel (yes, she still accumulates strays). Sue also paints animal portraits.

These thoughts were bought to you by Sue Jeffrey at 07:00