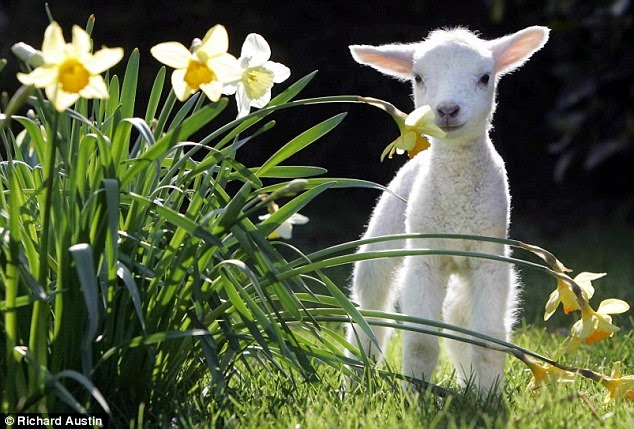 I heard a true story recently.

A young man shared how he worked on a farm in Paraguay. The farm had various crops and a few sheep. Now the ewes had just lambed and the farmer chose one and gave it into the young man's care. The farmer said as long as he fed and petted it, the lamb would follow him everywhere.

The farmer named it Navidad which is Spanish for the word Christmas. Sure enough that little lamb followed the young man everywhere and he grew very fond of it. He thought it must have been a special pet that the busy farmer had no time to look after. He formed a real bond with Navidad - similar to a man and his dog.

Time passed and as the end of the year approached, the young man had a disturbing thought. Had there been any particular reason why the lamb was named Christmas? Then the sad truth sank in. It all made sense now. Navidad was to be offered as their Christmas dinner. His little lamb to be killed just so they food to eat? He was truly saddened. Because the farm was poor, Navidad the little Christmas lamb must die ... so that they might live.

For the first time in his life he understood something of how God felt when His Son died on the cross taking on Himself the penalty of our sins. Jesus truly died that we might live. How deeply it cut the Father's heart to offer His own Son Jesus.

Mercifully the little lamb didn't know what would happen as it went quietly to be slaughtered ... but Jesus did and His suffering was great. Earlier in His ministry, John the Baptist saw Jesus coming and cried out, 'Behold! The Lamb of God who takes away the sin of the world.' His amazing sacrifice was foretold by the prophet Isaiah in the Holy Bible. ( Isa.53:5-7.)

This is the reason why Jesus was born in that manger so long ago.

We wish you a blessed Christmas from all your friends at Christian Writers Down Under!