I admit I’m a planner. I like to know what I ‘m doing and where I’m going. Mostly.  Occasionally  I will get a twinges of spontaneity, but mostly I’m a planner, which is fine except that life sometimes has a habit of messing up those plans.


For example recently my husband and I had planned to go to Sydney where our son and daughter and their respective families would gather for celebrate a special family birthday. We try to do this whenever a family member has a birthday. But like this time, it doesn’t always work to plan. Two days before the planned celebration, my husband came down with one of the dreaded viruses going around. Despite prayers for a quick miracle healing, in the end we realised it was not going to happen. As you can imagine we were very disappointed.


It happens in the writing life too. Sometimes we have plans for a character and that character refuses to co-operate, while another character becomes insistent we tell their story instead. Or it may  be that we put  a lot of work into a project only to find health issues keep interrupting it and pulling you down so that no writing is getting done. Yes, I’ve been a victim of that one a bit in the last couple of years. When that happens, we have a choice. We can either give up or put it all in the too hard basket. Or can accept this is the way it has to be for now, but that doesn’t mean giving up. Stubbornness is not a bad attribute for a writer to have. I will get back to my project as soon as the situation changes.


Sometimes your book will not turn out as you hoped. The publisher may produce a cover that does not help the book, or the editing may not be up to scratch and this happens even with traditional publishers these days as editors are overworked. I have recently read some shockers in a couple of books published by a large traditional overseas publishers, like the one which mentioned Jesus turning the wine into water. Really!  That’s not what my bible says.


It may a reviewer who just doesn’t get it and makes comments about the book that leads you to believe they didn’t understand where you were coming from. Reading is such a subjective thing. I’ve just finished reading a children’s book and my initial reaction was that the book was pointless.  Thinking maybe I was missing something, I gave it to someone whose opinion I trust and their reaction was similar to mine.  Both of us could not understand why the publisher had chosen to publish this book at all, especially given the cost involved in publishing a book.  Yet this was from a large and well know publisher. Maybe we are missing something, I don't know.


As well as reviewing on my  Write and Read with Dale blog http://orangedale.livejournal.com/I review books on Goodreads http://www.goodreads.com/and am constantly amazed at how several people can give a book 4 or 5 stars and then someone else comes in and claims it is the most boring book out and gives it 1 star


The writing life is not easy. That’s why it’s important to have writing friends and groups like this where we can support, and encourage each other  and spur each other on when we are feeling down , when the writing is not going well, when life interferes and stops us writing, or when covers or reviews are not as we hoped. 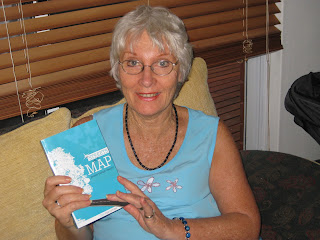 Streets on a Map, Dale’s latest novel was published by Ark House Press. Prior to that Dale has had seven children’s books and Kaleidoscope a collection of poetry published. Many of the poems in Kaleidoscope have been previously published in Australia’s literary magazines. She has won prizes for her poetry and has been published in several anthologies. She has also written bible studies and Sunday school lessons.More information about Dale can be found at www.daleharcombe.com or on her Write and Read with Dale blog http://www.livejournal.com/users/orangedale/

These thoughts were bought to you by Dale at 00:00