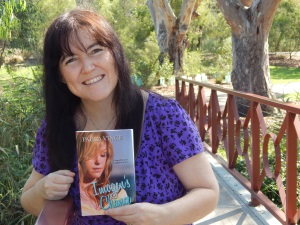 There's a story in my "Chicken Soup for the Writer's Soul" book written by a lady who once volunteered to help out in her child's first grade classroom. She would listen to students read from their readers. One little boy, whose home life was known to be a shambles, had a severe speech impediment that had held him back for several years. The volunteer mum had an impulse to give him a cheap story book of his very own. Well, she couldn't believe how that boy's face shone, as happy tears slid down his cheeks. The teacher reported that he hugged the book to his chest at all times when he wasn't poring over it. Miraculously, owning his first  book helped him to begin to read with more clarity and expression.

This was a pivotal event for that volunteer mum, who had been toying with the idea of trying to write a novel. When she saw what an impact the author of that Little Golden Book had made in the life of a disadvantaged child, she longed for the potential chance to make a similar difference in some other readers' lives.

I understand where she's coming from because I've been in both positions, hers and the boy's. I had a miserable time throughout school, but being a bookworm brightened my life. I remember hanging out for the next books in series, having my heart soar on days when the mobile library drove onto the school premises and sharing the hurts and triumphs of each character I read about. As a Primary School student, I often used to 'act out' the stories, walking around with a book in front of my nose pretending to be one of the characters. Recently, I drove my kids past a house where I used to live when I was little. There was a great wooden plank fence still there which used to be the "Faraway Tree" which I'd climb up to visit Moonface, Silky and the rest of Enid Blyton's gang. People used to think I was a strange little girl.

As I grew up, I wanted to pay it forward too. What a privilege, to be able to brighten and affect the lives of other readers the way these authors did for me. I love to think of being part of the pond ripples, as other potential writers have even written or emailed to say the same thing about me. My writing is part of my way of saying thank you to each of the authors who would have had no idea of the impact they'd make on me.

That's the tip of the iceberg as there have been many others too.

Paula Vince is an award-winning author and homeschooling mum. Her novels are set in her own beautiful corner of the world, the Adelaide Hills. Please visit her at her brand new website, www.paulavince.com or her blog, www.justoccurred.blogspot.com

These thoughts were bought to you by Paula Vince at 09:41