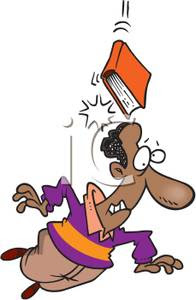 And not just misplaced apostrophes, but any aspect of writing that we think is wrong or could be improved. Such as using sentence fragments. Or starting sentences with conjunctions.

The context for this is a question that has come up in this group and also in the Australian Writers’ Forum (http://forum.catplace.net) and probably most other writers’ groups. When critiquing someone else’s writing, should we be exclusively supportive, or should we point out perceived problems?

In 1 Co 5, Paul addresses a church that was turning a blind eye to sins committed by one of its members—and they were apparently proud of their ability to bite their tongues and accept the situation. Paul won’t stand for it, and tells them to confront the guilty party.

Mt 18:15 also directs believers to point out a fellow believer’s fault to him.

Jesus demonstrated his willingness to take strong action against behaviour he thought was wrong; for example, driving vendors out of the temple using a whip (Jn 2:14–16). And the Old Testament brims with examples of God or his prophets directing his people to confront wrongdoers.

So it seems to me that we are not obliged to bite our tongues when faced with wrongdoing; rather, we are to speak up. The general principle I’d like to conclude is that we are not called to be agreeable the whole time.

If we courageously (and perhaps foolishly) apply this principle to critiquing, it would lead us to comment negatively on aspects of writing with which we disagree. Obviously this should be done nicely and with the intention of helping the writer to improve their craft. Following Mt 18:15, it should preferably be done in private and so may not be appropriate when reviewing titles on Amazon, etc—although in that case the principle of not misleading those who read our reviews should be considered.

Obviously subjectivity is a problem when critiquing writing. Sometimes it’s hard to distinguish between personal preferences and absolute right-and-wrong. Even I don’t have the courage to explore any possible parallel between this problem and the extent to which Christians are expected to know exactly what’s right and wrong regarding sin (although I know of no passages in the Bible in which any such uncertainty was accepted as a reason to stay quiet). ‘This may be just my opinion, but…’ seems appropriate.

No matter how tactfully expressed, critical comments can be hard to make. They can jeopardise friendships. But ‘tough love’ can also make friendships stronger by showing how keen we are help our friends to succeed.

I know I’m stretching any analogy between God’s attitude to sin and our attitude to writing flaws perhaps beyond breaking point. Splitting an infinitive probably doesn’t justify flagellation as a response.

Now, feel free to critique my writing—and my theology!

These thoughts were bought to you by Peter McLennan at 08:13